The AMCHA Initiative just released their report on antisemitic and anti-Zionist activity on college campuses, and things are getting worse.

o Classical antisemitic harassment decreased by 42% from 205 in 2017 to 118 in 2018.
o Israel-related harassment increased by 70% from 71 in 2017 to 121 in 2018.
o Antisemitic acts involving the singling out of Jewish and pro-Israel students and groups for personal vilification more than doubled, with a tripling of expression falsely implying these students or groups are linked to “white supremacy.”
o Antisemitic acts involving the unfair treatment of Jewish and pro-Israel students or attempts to exclude them from campus activities more than doubled, with expression calling for the total boycott or exclusion of Zionist students or expression from campus life nearly tripling. 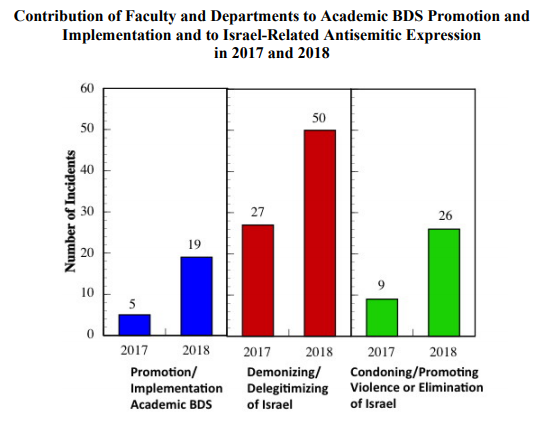 Expression of BDS supporters acknowledging that the goal of BDS is to bring about or facilitate the elimination of Israel as a Jewish state increased dramatically, with one incident reported in 2017 and 32 incidents in 2018.

Being a Zionist Jew on campus in 2019 is like going into battle. It shouldn't be that way.