First of all, McCollum's bill is a lie. Israel doesn't torture kids, despite the anti-Israel NGOs who claim otherwise.

US military aid to Israel is for weapons systems and missile defense, not on prisons.

But the real hypocrisy is that McCollum is pretending to care about children and our tax dollars. In fact, the only children that she seems to actually care about are those whom she can use as political pawns against Donald Trump or Israel.

Let's compare that to the number of children locked up in the US in both youth detention facilities and adult prisons: 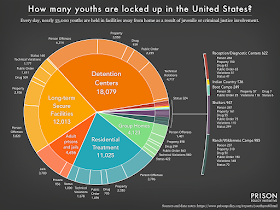 4,600 kids are in in adult prisons, where they are far more likely to be sexually abused than adults are.

These children are incarcerated with US tax dollars, whether on the state or federal level. (Yes, there are children in federal prisons as well.)

Yet somehow, McCollum's interest in children and tax dollars evaporates when the children are in her own back yard.

Cloaking her hate of Israel is the mantle of morality, Betty McCollum shows what a hypocrite she is. There is no love of children in her bill - only hate for the Jewish state.