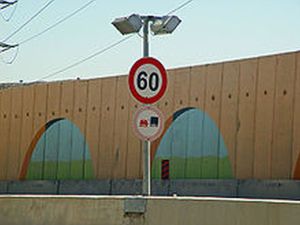 Jerusalem, July 25 - A mix-up in communication this morning resulted in several groups issuing loud demands that contradict every other demand they have ever made.

Placards decrying "wanton destruction," "violations of human rights," and "disregard of people's need to live a normal life" appeared near the barrier just south of Jerusalem Thursday. Small knots of protesters yelled slogans and urged authorities to "just let people live," bearing a message that at first appeared to support the continued existence of the barrier, which has saved thousands of Israeli - and Palestinian - lives since its construction last decade.

"We're not used to protesters encouraging us to keep doing what we're doing, so that was refreshing," admitted an IDF officer who gave his name as Captain Giladi. "It's good to see some consistency from self-proclaimed human rights activists, to see them acknowledge the lives this barrier has saved on both sides of the conflict: Israelis directly through the prevention and deterrence of attacks, and Palestinians indirectly through the consequent avoidance of military action. Kudos."

Witnesses reported that it took nearly an hour for the protesters to realize they had not arrived at the site of a planned demolition, with the realization occurring only after the dozen or so participants ran out of steam and began texting with friends, family, and other activists wondering where they had gone. A scheduled demonstration against the destruction of a Palestinian-built structure - built without a permit and in violation of Civil Administration security procedures - fizzled because most of the activists ended up at the security barrier instead, calling for it not to be destroyed.

"Well, this is embarrassing," muttered a protester who declined to be identified. "We're not taking money from foreign governments so we can uphold the human rights of Jews, I'll tell you that. This particular use of European Commission and Government of the German State of Hesse funds is not going in the annual report."

"I was wondering where all the journalists had got to," recalled another. "We had arranged with people from Haaretz, AP, BBC, the works - probably at least as many reporters and camera people were going to show up as participants, but I admit sometimes the line is fuzzy between those categories. Took a while till the penny dropped - we thought at first traffic held people up, but, well, oops. We won't make that mistake again."

We have lots of ideas, but we need more resources to be even more effective. Please donate today to help get the message out and to help defend Israel.
Elder of Ziyon at Thursday, July 25, 2019
‹
›
Home
View web version