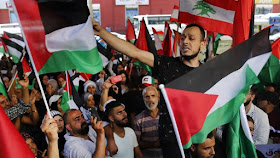 Lebanon's Al Akhbar reports that Lebanese security forces have been chasing after any cars that display the Palestinian Arab flag and arresting their drivers.

The security services have been arresting Palestinans who have been protesting the new draconian laws that make it even more difficult than beforefor them to find jobs in Lebanon.

Al-Akhbar found a police report about a Palestinian arrested in Sidon for displaying the Plaestinian flag and "playing revolutionary songs." He was fined 150,000 Lebanese pounds, equivalent to  $100.

There is no law in Lebanon banning flags from car windows.

Rampant discrimination against Palestinians in the Arab world is simply an unreported story in the West, because so many reporters are invested in the idea that only Israelis can be blamed for Palestinian misery.

(h/t IINZ)
We have lots of ideas, but we need more resources to be even more effective. Please donate today to help get the message out and to help defend Israel.
Elder of Ziyon at Thursday, July 25, 2019
‹
›
Home
View web version