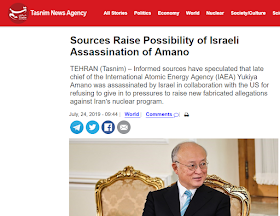 Informed sources told Tasnim that Amano is thought to have been “eliminated” by the Israeli regime so that the UN nuclear agency could have a new chief.

The late Japanese secretary general of the IAEA was reportedly standing against the US and Israeli “heavy pressures to open a false case against Iran on the nuclear issue,” the sources said.

While the story is absurd, there is only one country that eve threatened Amano's life - and that country was Iran. 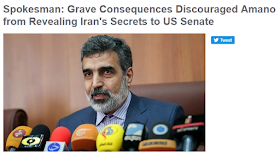 Director-General of the International Atomic Energy Agency (IAEA) Yukiya Amano didn’t disclose secrets of its recent agreement with Iran to the US Congress for the fear of its aftermaths, an Iranian spokesman said Monday.

"In a letter to Yukiya Amano, we underlined that if the secrets of the agreement (roadmap of cooperation between Iran and the IAEA) are revealed, we will lose our trust in the Agency; and despite the US Congress's pressures, he didn’t give any information to them," Spokesman of the Atomic Energy Organization of Iran (AEOI) Behrouz Kamalvandi said in a meeting with the Iranian lawmakers in Tehran on Monday.

Kamalvandi said revealing the secrets of the roadmap wouldn't have been good for him either.

The original article had been quoted at the time with Kamalvandi saying more explicitly, "Had he done so, he himself would have been harmed."

Iran has literally bragged that it has threatened  the lives of IAEA officials if the secret side deals were revealed. Those deals were later revealed to include allowing Iran to self-inspect some facilities and additional exemptions that allowed Iran to be in compliance on Implementation Day, January 16, 2016, which therefore allowed Iran to get $100 billion in sanctions relief - and a $400 million ransm for American hostages.