If Ilhan Omar is really pro-boycott, she should support anti-BDS legislation the way they are written

Ilhan Omar's proposed congressional resolution that tries to say that boycotts should be protected as free speech is actually a wonderful argument for much of the anti-BDS legislation that has now been made into law in 27  states, as shown in red in this handy map created by the BDSers: 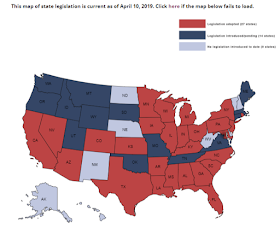 The state laws are not outlawing boycotts nor are they limiting free speech. For the most part all they are doing is saying that a company cannot do work for the state if it embraces BDS.

The states are boycotting companies that boycott Israel.

Which is entirely proper. States can limit business with whomever they want based on how the businesses act. One such law is New York's Executive Order 177, where any potential contractor must sign the following certification:

In accordance with Executive Order No. 177, the Bidder hereby certifies that it does not have institutional policies or practices that fail to address the harassment and discrimination of individuals on the basis of their age, race, creed, color, national origin, sex, sexual orientation, gender identity, disability, marital status, military status, or other protected status under the Human Rights Law.

New York State, and probably many others, say they will not do business with any company that discriminates against people. But does this limit the free speech of those companies? Not at all. They can choose not to bid.

People and companies can act as they want within the law, and states can decide who they will and will not do business with. Omar can boycott Israel and she can create a business that boycotts Israel and none of these anti-BDS laws would stop her from doing that.

If Omar really supports boycotts "in pursuit of civil and human rights,", as her bill claims, she must support states choosing to boycott those that want to discriminate against Jewish people and businesses in Israel, which is what BDS advocates.