IfNotNow's harassment of presidential candidates reveals how hateful @ifnotnoworg is

As Daled Amos reported, the radical group IfNotNow has started a strategy of "bird-dogging" Presidential candidates in order to corner them into saying that they support the organization's extreme anti-Israel agenda.

They executed their plan against a number of candidates this weekend. Cory Booker seemed prepared for them and didn't let himself get cornered the way Elizabeth Warren appeared to. This frustrated them far more than it frustrated him:


Yesterday, we asked @CoryBooker “Do you believe the Occupation is a human rights crisis for Palestinians?” He got visibly frustrated.

He admits: “If that's your issue I would understand if you want to support somebody else”


Joe Biden as well seemed prepared for them and steered back to his own talking points rather than let himself be co-opted by their language:

Look at the question they asked both candidates, and presumably others: whether they consider the situation in the West Bank to be a "human rights crisis."

The idea that the West Bank is in crisis and, by implication, one of the top human rights concerns for the United States is insane.

I can find no objective survey of human rights issues in the world that mention the "occupation" as being in the top ten or twenty human rights crises worldwide.

Maplecroft has an objective report on human rights worldwide. Although it doesn't publish it publicly, its 2014 report indicates where the worst human rights crises are worldwide: 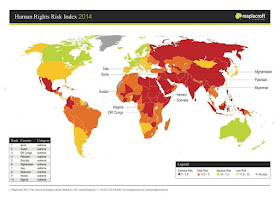 Other observers give various lists of the worst human rights abusers in the world, and Israel is never on any list that actually tries to compare it with everyone else.

IfNotNow does not want the US to spend its time and resources on helping the worst human rights victims. The only non-Israeli causes it cares about are the ones that it wants to hijack into making people hate Israel.

In short, IfNotNow is an anti-Israel hate group.

Look at this more expansive response by Biden about his vision for Middle East peace - one which is very much in line with the accepted Obama-era principles, with the UN and the EU, that includes pressuring Israel but also giving Palestinians responsibility for peace.

The IfNotNow ambusher simply does not want to consider anything but pressuring Israel. The idea that Palestinians must eliminate hate and accept a Jewish state is treated like irrelevant at best, wrong at worst.

Which means that their interest in peace is literally zero.

The entire purpose of the group is anti-Israel, not pro-peace. These videos prove it.

We have lots of ideas, but we need more resources to be even more effective. Please donate today to help get the message out and to help defend Israel.
Elder of Ziyon at Monday, July 15, 2019
‹
›
Home
View web version