Omar Shakir of Human Rights Watch pretends to condemn Hamas' Fathi Hamad's Friday statements (that was first reported here) threatening to kill all Jews  of the world - but he ends up praising Hamas instead! 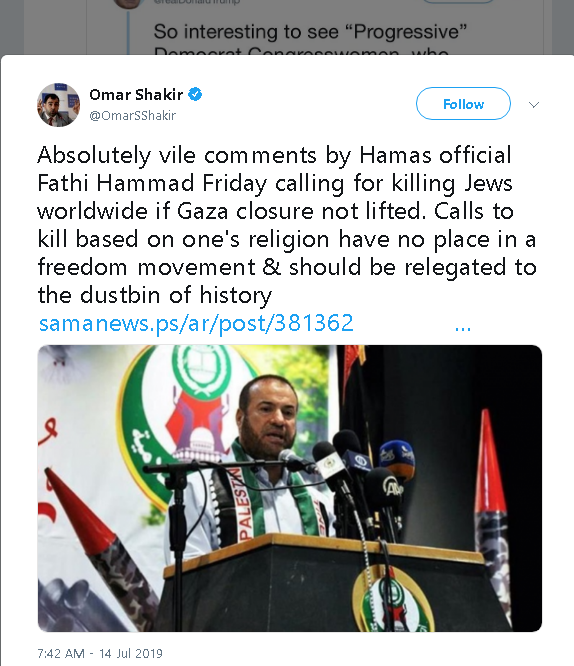 By using those words, HRW shows that it actually likes and supports the international terror group Hamas, and is only upset that one of its more visible members (in the "political wing," no less)  said something distasteful.

Notice that Shakir didn't mention the other things Hamad said - that Palestinians have built explosive vest factories that should be distributed now, that Jews in Israel including Judea and Samaria should be blown up and murdered by knives that cost 5 shekels.

He doesn't condemn that because the intended victims are Israeli Jews, and presumably deserve death at the hands of the "freedom movement" he admires so much.

Hamad also said that Palestinians worldwide have been "warming up" to perform terror attacks in the countries that host them.

If you go through Shakir's long social media history, you will never find him describing Israel in any positive terms, let alone praising it the way he characterizes Hamas on the very day that we find out beyond any doubt that Hamas has never left its antisemitic genocidal ways behind.

What little dignity Human Rights Watch has remaining after its history of anti-Israel bias has evaporated by one of its most visible members openly praising the innovators of suicide bombings, bus bombings, anti-tank missiles aimed at school buses, tunnels dug into civilian communities to kidnap women and children, using their own people as human shields, and shooting thousands of rockets at civilians, as a freedom movement.

If HRW wants to continue being viewed as a human rights organization, Shakir should be fired, period. This is absolutely disgusting.


We have lots of ideas, but we need more resources to be even more effective. Please donate today to help get the message out and to help defend Israel.
Elder of Ziyon at Sunday, July 14, 2019
‹
›
Home
View web version