Amnesty takes part in publicity stunt, "hosting" a play that was never written, to get people to hate Israel

A play by award-winning Palestinian playwright Ahmed Masoud named "Obliterated" was scheduled to be performed on August 9th at Amnesty International. The main actress Maxine Peake is famous in England.

The free event was sold out. 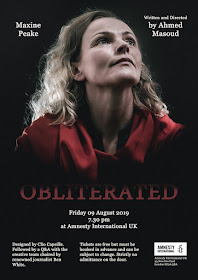 The entire event was a scam, a publicity stunt that was never meant to happen.

Over 2500 people who registered for the play, and who entered their personal information into Eventbrite, received this email from Masoud:

Oblitereated [sic] is cancelled. There was never a play or a show, I didn’t write it and Maxine never rehearsed it.

I am not sure whether I will be able to write or do theatre again.

They took our theatre, and with it our play.

Not even a year ago, on 09 August 2018, Gaza's only theatre the Saeed Almishal Cultural Centre was bombed by Israeli warplanes and ripped to the ground in seconds....

I want to ask questions. Why is art so threatening? Who would find a theatre a danger enough for missiles? What's going to become of the creatives, actors, writers, directors and audiences now?

I cannot write, but I still want to protest, to make my voice heard, to highlight what happens when art and theatre are stolen away. Maxine and I want to invite you, the audience, the 2529 people who booked, to be part of this experience, to be angry at this injustice.

As a writer and theatre practitioner, I wanted to see how it feels to deny people access to this freedom.

I approached Maxine Peake, and together we created Obliterated to express our rage and for us all to participate in this experience of cultural theft.

...I am not sure whether I will ever do theatre again. I am not sure if I have been beaten down too far by cruelty. Maybe on a far-off day, this play will be born again. But for now, I would like to thank Maxine Peake and Amnesty International UK for supporting this creative response. And I want to thank you for being part of this protest, for getting my voice heard.

The cultural center that Israel destroyed was part of an office building that also housed Hamas Interior Security offices. It was in response to hundreds of Hamas rockets to Israel in the days before.

Masoud and Amnesty don't mention that.

Amnesty put out a press release saying the play was canceled out of protest for the cultural center destruction but didn't mention that the play was never written to begin with.

The actor Maxine Peake has cancelled a play due to have been performed in London next week as a protest to highlight the plight of Palestinian playwrights and other artists targeted by the Israeli authorities.

The one-person piece, Obliterated, by the acclaimed UK-based Palestinian playwright Ahmed Masoud, was due to have been performed at Amnesty International UK’s east London headquarters on the evening of 9 August, and was set to star the Dinnerladies and Shameless actor.

The scheduled performance - which is fully booked - would have marked exactly one year since the destruction by an Israeli airstrike of the Mishal Cultural Centre last year, the only working theatre in Gaza which housed numerous arts projects in the beleaguered Palestinian territory.


The play was never written. The actress never intended to perform. There was never meant to be a Q&A afterwards with Israel hater Ben White.

The cancellation was the show, to get people to be upset - and to direct their anger not at Amnesty or Masoud but at Israel.

Is it appropriate for a human rights organization to actively deceive thousands of people, to lie in order to make people hate Israel?

When you think about it, this is what Amnesty does all the time anyway. Their "Gaza Platform" remains on its site with hundreds of examples of "civilians" killed by Israel who were actually terrorists, even according to the UN and B'Tselem. Their reports are filled with anti-Israel lies that they never correct - they know they are lying to manipulate people to hate Israel.

So putting on a fake play fits in exactly with Amnesty's playbook of making up lies to incite people against Israel.

To thinking people, however, it shows that Amnesty is not a sober and objective reporter of human rights abuses but an active propaganda outlet to incite hatred against the Jewish state.


We have lots of ideas, but we need more resources to be even more effective. Please donate today to help get the message out and to help defend Israel.
Elder of Ziyon at Tuesday, July 30, 2019
‹
›
Home
View web version