Al Jazeera archaeologist implies Palestinians have been around for 100,000 years 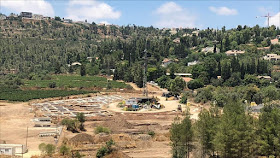 A couple of weeks ago, the Israel Antiquities Authority announced a major find of an entire city from 9,000 years ago near Jerusalem.

Since the city pre-dates Biblical times, it is obvious that this was not a dig that discovered any Jewish objects.

I made a humorous tweet about how Israel, which according to academic and professional Israel-hater Nadia Abu el-Haj  uses archaeology to only pretend to discover ancient Judean and Israelite finds and which ignores all other archaeology, must have made a mistake by publicizing this find.


But...I was told that the Israel Antiquities Authority didn't bother exposing any archaeology that wasn't Jewish! There have been entire books written with that thesis! pic.twitter.com/zWi8c5kbBH
— Elder Of Ziyon ҉ (@elderofziyon) July 16, 2019

Now an Arab site has turned this story around, claiming that Israeli archaeologists are super embarrassed by these findings, which show that people lived in the region before the Jews.

This isn't exactly a revelation to those with a passing knowledge of the Bible.

Archaeologist Abeer Ziad of Al Jazeera looked at the site and - wow - discovered that it was quite old, and she is claiming that the Neolithic people who lived there were, of course, "Palestinians!"


She considered this to be evidence that Palestinians had inhabited the area for thousands of years, which refuted Zionist claims that the Jewish people were indigenous.

She explained that there are remnants in Palestine "dating back to a hundred thousand years ago, and this new discovery is evidence of the existence of civilizations and cultures and successive people who preceded the Jewish presence - if proven - by a long time."

Unfortunately for Ziad, those civilizations all disappeared, and the oldest remaining people is indeed the Jews. Which is exactly why Palestinians claim to simultaneously be Arabs and Canaanites or Jebusites when the topic is Jerusalem (not Girgashites or Hittites, for some reason.)


We have lots of ideas, but we need more resources to be even more effective. Please donate today to help get the message out and to help defend Israel.
Elder of Ziyon at Tuesday, July 30, 2019
‹
›
Home
View web version