Reported antisemitic incidents in NYC in Q1 FAR more than all other hate crimes COMBINED. (22x more than anti-Islam incidents.)

The NYPD Hate Crimes statistics for the first quarter of 2019 shows that 59% of all reported hate crimes have been against Jews - far more than against all other groups combined.

In previous years, the anti-Jewish crimes reported nationwide were far higher than other anti-religious crimes, but there were still more anti-black and anti-gay crimes than anti-Jewish. In New York, though, Jews are the main target of hate - by far.

66 reports of bias incidents against Jews, and 46 against everyone else. 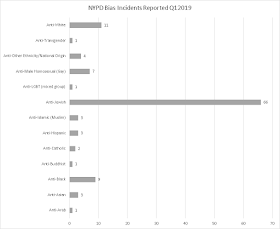 It is getting worse. The Wall Street Journal reports that through May 19, the total number of incidents this year has grown to 176, ad 83% increase from last year, and again the Jews are the main targets.

"Our residents should feel free to worship without fear–and yet they can’t right now," City Council Speaker Corey Johnson said. "We have an anti-Semitism crisis in New York. It’s a national problem, but New York accounts for way too many incidents." ...

Especially striking is the disparity between anti-Islamic and anti-Jewish bias incidents reported. We ae hearing about an epidemic of Islamophobia, but at least in New York City there is little evidence of it, with only 3 anti-Islam and one anti-Arab incident, which is trivial compared to the 66 antisemitic incidents.

Although the news media has been reporting on the startling increase of attacks by blacks on religious Jews especially in Brooklyn, the NYPD stats shows that crimes against Jews are equal opportunity. 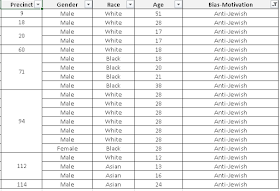 Of twenty incidents for which people were arrested, 12 were done by white men or boys (although it looks like only 6 separate whites were arrested, two for multiple crimes); four black men, one black woman, and three Asian men and boys.

The hate is increasing across the board. It isn't right-wing or left-wing, it isn't only oppressed minorities or white supremacists. It's coming from everywhere, and it is way past time for people to stop blaming their political opponents for the hate that is coming from their own quarters.

We have lots of ideas, but we need more resources to be even more effective. Please donate today to help get the message out and to help defend Israel.
Elder of Ziyon at Wednesday, May 29, 2019
‹
›
Home
View web version