On behalf of the Jewish Electorate Institute (JEI), Greenberg Research conducted a survey of 1,000 Jewish voters to understand what drives their engagement in politics in advance of the 2020 elections. The results demonstrate that domestic issues dominate the policy priorities of the Jewish community as they determine which candidate to support in the 2020 election, as opposed to issues related to Israel, which remains the lowest policy priority of Jewish voters.

During a conference call, the person who did the poll -- Stan Greenberg himself -- shared a Powerpoint presentation of the data.

Here are the responses he got to the question regarding what are the most important issues affecting voting: 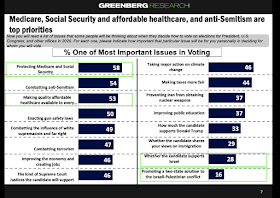 Support for Israel rated next to last in importance in deciding who to vote for. The natural consequence of this prioritizing is that Trump's record on Israel will do nothing to counteract the usual Jewish support for Democrats -- despite Trump's recognition of Jerusalem as the capital of Israel, his moving the US embassy to Jerusalem, recognizing the Golan as part of Israel, voiding the Iran deal while reimposing sanctions and Trump's refusal to give the Palestinian Arabs a free ride on economic aid.

But the continued overwhelming support by Jews for the Democratic Party should not come as a surprise.

On issues of Jewish Identity, 90% of the respondents said that "being Jewish" was important to them to some degree:

34. How important would you say being Jewish is in your own life?


70% of the respondents answered that they feel close to Israel

38. Do you agree or disagree with the following statement? “Caring about Israel is a very important part of my being a Jew.”


So, if Jews find Israel to be so important to their identity as Jews, where did Israel rank in their calculations when voting for a president in 2008?

19. In deciding who you would like to see elected president next year, which issue will be most important to you? Please select one of the following:

Concern for Israel simply does not translate into a priority for considering for whom to vote during a presidential election year. If anything, the fact that 28% now as opposed to only 6% then thought of Israel as a relevant issue is quite an improvement.

Interestingly, in 2007 the concern for immigration was minimal. Only 6% thought it was a consideration in choosing a president. But now, when asked how important it was "whether the candidate shares your views on immigration," 29% responded yes.

That is quite a jump.

Does that increase only reflect an increased concern and heightened sensitivity for those seeking a new life in the US, or is there more to it?

Polls Are As Much An Art As They Are a Science


The media, which tended to be more protective and less critical of Obama, has come all out against Trump since even before he took office, resulting in accusations of "fake news" from both sides.

Similarly, in the current poll itself, one of the questions is limited to "Combatting the influence of white supremacists and far right" -- but completely ignores the issue of racism and antisemitism from the left.

Jonathan S. Tobin sees the results of the poll illustrating What happens when Israel is your lowest priority, but also sees an animus towards Trump explained in part by a degree of bias in the polling:


Greenberg Research is a liberal Democratic polling firm. That bias was reflected in the wording of some of the questions and the fact that it asked respondents their opinion of “white supremacists and the far right,” though didn’t ask about left-wing anti-Semitism. [see slide 7 above]

Tobin points to another example of a leading question used in the poll when respondents were asked "is President Trump at least partially responsible for the targeted attacks on synagogues, including those in Pittsburgh and Poway?" and whether most concerning to them was “President Trump encouraging ultra-right extremists committing violent attacks” -- again, omitting any mention of left-wing antisemitism. 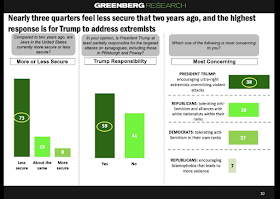 Considering the level of partisanship and the blame attached to Trump, Tobin does not find it surprising that 39% of Jews surveyed believe the answer is to simply work to get Trump out of office, while only 12% see adding to armed security as the answer. 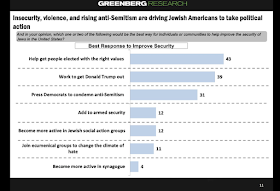 Tobin sees holding Trump responsible for antisemitic attacks as irrational, especially since those who carried out the attacks state their opposition to Trump, whom they believe is too friendly to Jews:


The notion that anti-Semitism was somehow lying dormant until January 2017 and that throwing the most pro-Israel administration to date out of office and replacing it with the party that is prepared to tolerate the likes of BDS supporters and anti-Semites like Reps. Ilhan Omar (D-Minn.) and Rashida Tlaib (D-Mich.) will make Jews safer strains credulity.

A measure of the extent people will go to blame Trump for racism was recently displayed in the Washington Post, in an article on the measure of racial prejudice since Trump has taken office.

Apparently, prejudice is down.

But rather than give any credit Trump, the researcher feels forced to theorize that the decline is a reaction in spite of Trump:


Racial prejudice has not increased among white Americans since the explosive 2016 election, argues political scientist Daniel J. Hopkins. It has actually decreased by some measures, he found, possibly as a reaction to Trump’s unexpected ascension to the White House. [emphasis added]

It seems it was not too difficult to resolve this apparent contradiction between the decline in racial prejudice since Trump took office and the accepted belief that Trump in fact encourages racism:


Hopkins told The Washington Post that the results initially surprised him. Upon reflection, however, “it’s quite conceivable that Trump has simultaneously galvanized a small number of highly prejudiced white Americans while also pushing millions more to affirm that they are not as prejudiced,” he argued.


In other words, Hopkins believes the study provides evidence that the racially incendiary rhetoric and policies issuing from Trump’s White House have pushed the majority of Americans in the opposite direction.

In the current climate, Trump can do no right.

But the poll is not all bad news for Republicans.


The Silver Lining For Republicans, A Concern For Democrats?

In a post he contributed on Instapundit, David Bernstein -- a law professor and contributor to The Volokh Conspiracy -- examined the poll results and addressed a different implication of the poll: Are Young American Jews More Supportive of Trump Than Young Americans in General?

He bases his question on this part of the poll: 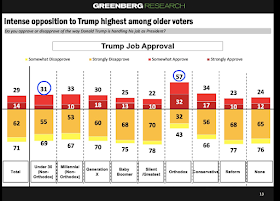 
Much more surprising, and not in the headlines, was that the survey found that 31% of Jews under 30 (and at least 18) approve of President Trump, higher than any other Jewish age demographic except for slightly higher approval among millenials. But wait, there’s more.

The summary published by the JEI mysteriously excludes Orthodox Jews from its data on Trump approval by age group, but only from the younger cohorts. Thanks to high Orthodox birth rates, Orthodox outreach efforts, and widespread assimilation among the non-Orthodox, Orthodox Jews are a much larger percentage of the younger Jewish cohort than of older Jewish cohorts. 20% is a reasonable estimate of the percentage of American Jews under 30 who are Orthodox. And 57% of Orthodox Jews approve of Trump, but let’s round that up to 60% for the younger cohort, since younger Jews in general are more approving of Trump. That means approximately 37% of American Jews under 30 approve of Trump. By contrast, a recent poll showed that only 33% of Americans ages 15-34 approve of Trump. [emphasis in the original]

Conservatives have been talking about the Jewish vote going their way due to the increasing number of Orthodox Jews for what seems like forever. Here, at least, there is some small indication that this change may be beginning to manifest itself.

We'll have to wait and see.

The Good News Is There Is No Growing Divide Between Israel and Diaspora Jews! The Bad News Is...

Israeli political scientist and author of The Virtue of Nationalism, Yoram Hazony, responded on Twitter to Tobin's observation "that only Orthodox and politically conservative Jews consider Israel a priority is not really news": 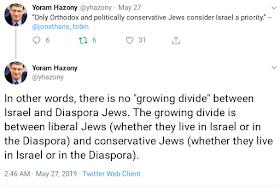 In response to Rabbi David Wolpe, Rabbi of Sinai Temple in Los Angeles, who tweeted back, " I hope it leads more to re-engaging efforts than to triumphalism," Hazony replies

The fight over the Jewish vote in next year's 2020 presidential election is symptomatic of the rift between conservative and progressive Jews -- a struggle that expresses itself most clearly in the fight over Israel.

Not so long ago, it was unheard of to publicly criticize Israel. It was a question that was debated. Now, it is not only commonly accepted -- we have groups which go beyond criticism, deliberately questioning Israel's legitimacy without ever saying a word in support of the Jewish State.

Some of the more radical fringe groups openly say Kaddish for Palestinian terrorists.

We can debate how "Jewish" such groups are and who in fact is funding and directing them, but the fact remains there is a rift and it is growing.

Here in the diaspora, lacking the Jewish Land, Language and Life that ultimately bind Israelis together, the connection that Jews in the US feel towards Israel is as important as ever. That connection does not have to dictate who Jews vote for, but the indication that the connection manifests itself mostly in words is an increasingly worrisome problem.

We have lots of ideas, but we need more resources to be even more effective. Please donate today to help get the message out and to help defend Israel.
Elder of Ziyon at Wednesday, May 29, 2019
‹
›
Home
View web version