Yes, Palestinian identity is only meant as a weapon against Israel

I sometimes see endless Twitter discussions on whether Palestinians are a people, or whether pre-Israel Palestinian Arabs were a people.

Some note that it is hard to deny that Palestinians are a people today, regardless of history, so therefore the history of whether they were a separate people beforehand doesn't matter too much.

However, history matters. Knowing the history of how they became "Palestinian" is key to understanding today's Middle East.

Up until 1947, Arabs in Palestine were simply Arabs, for the most part. The word "Palestinian" referred almost exclusively to Jewish residents of Palestine. 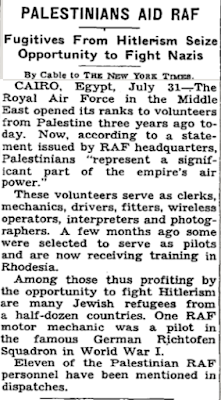 Even the 1964 PLO Charter used the phrase "Palestinian Arab" repeatedly to distinguish from Palestinian Jew, which is what people still thought of when they heard the word "Palestinian" in 1964.

A group becomes a people when they have something in common with each other. The arbitrary boundaries of the British Mandate, which lasted less than three decades, was not enough to make Arabs of Palestine feel "Palestinian."

They identified with their clans, with their villages, with their religion and with their Arab identity, but being "Palestinian" was not an important part of their identity at all (with rare exceptions.) For the most part, Arabs moved freely throughout the Arab world as droughts or wars or economic incentives impelled them to. Arab clans tenaciously held onto their origins, usually in Arabia or Yemen, and their tribes often stayed together as they moved from one Arab land to another.

Even today, if you pick a popular Palestinian surname and look up their family history in Arabic, you will see where they originally came from. You will not find very many who say they originated in Palestine. Usually they trace their history back to Arabia or Yemen, although there are plenty whose names originate in North Africa.

Only in 1948 did Palestinian Arabs start to have something in common with each other - and that was because of how they were treated by their fellow Arabs, not Jews.

As mentioned, Arabs often came to Palestine for economic reasons. Tens of thousands of Syrians moved in during the 1920s because of a drought in the Hauran region. Demographic studies show that the biggest increase in Arab populations during the years before 1948 were invariably in Jewish areas, where the industry and jobs were. But many would travel back to Lebanon or Syria as needed.

During the 1936-9 riots, many wealthier Arabs moved to Lebanon to escape the troubles with their extended families.

In short, since Arabs in Palestine felt that they were simply Arabs and not Palestinian, it was relatively easy for most to make the decision to leave during the 1948 war to be with their fellow Arabs they assumed would take them in the way they have throughout history as they migrated across the Arab world. The ones who stayed and fought for their homes were not unified as Palestinian Arabs but simply because they had ties to their villages, and there was no central command to speak of because Arabs in villages in Palestine didn't feel much affinity with Arabs of other villages.

But this time, for the first time as far as I can tell, the Arab migration was not welcomed by their fellow Arabs.

The reason is simple. Arabs were deeply shamed by losing the war to the hated, lowly Jews who had been second class citizens in Arab societies forever. Palestinian Arabs reminded the rest of the Arab world of their shame. Instead of integrating the refugees, they kept them separate. They blamed the West for allowing Israel to be born and they insisted that the West - i. e., the UN - pay for the Palestinian Arabs to be housed and educated.

Most importantly, the Arab League recognized that the refugees could be a huge weapon against Israel, because if they would return there would be no more Jewish state.

Every Arab from Palestine became a pawn.

There was another important reason why the Arab nations wanted to use Palestinians as cannon fodder against Israel. They knew that they had a restless, homeless and stateless population in their midst and they didn't want them to blame their hosts for their problems. They created a myth of a Palestinian people displaced by Jews in order to direct their hate towards Jews and Israel - and away from the Arab leaders who refused to naturalize them (except for Jordan.)

“The Arab states will not integrate the Palestine refugees because integration would be a slow process of liquidating the Palestine problem." Ahmed Shukairy. chairman of the Palestine Liberation Organization. declared in an interview today.

The Arab record towards Palestinians is pretty bad. Palestinian Arabs have been slaughtered, deported, and given few rights.  But they have been taught that they are loyal Arabs and the only people they must blame for their predicament is Jews.

UNRWA is a big part of this. In the beginning, UNRWA tried to relocate Palestinian Arabs in countries like Iraq and it worked to have them become productive citizens of their host countries. Arab nations resisted and soon UNRWA used its own money to hire thousands of Palestinian Arabs themselves - who  then imposed their own agenda on UNRWA, its mission and its textbooks. This is why Palestinians, and only Palestinians, are still considered "refugees" decades after all other of the millions of WWII-era refugees have been resettled elsewhere.

Even if you want to blame Israel for the displacement of hundreds of thousands of Arabs, the only people to blame for their continued misery for seventy years are the Arab nations themselves. The world refuses to recognize this or even demand that Arab nations take care of their "guests" the way every other nation is expected to.

Palestinians themselves want to become citizens of their host countries. When Egypt and Lebanon briefly changed the rules of citizenship allowing many Palestinians to become naturalized, tens of thousands of Palestinians jumped at the opportunity. Even Hamas leaders became Egyptian citizens!

There can never be peace without the Arabs taking responsibility for the Palestinians in their midst. The myth of an ancient Palestinian people is one roadblock in the way of treating them like every other refugee population. This is why the truth matters - the truth is essential to getting everyone closer to a real peace.

We have lots of ideas, but we need more resources to be even more effective. Please donate today to help get the message out and to help defend Israel.
Elder of Ziyon at Thursday, April 04, 2019
‹
›
Home
View web version