The balloon bomb threat grows - and it can get MUCH worse 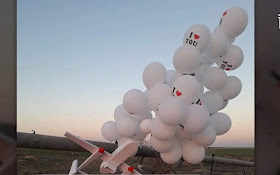 Police sappers were called to the Israel-Gaza border area on Saturday after a balloon suspected of carrying an explosive device landed in Israeli territory.

Hebrew media reported that the balloon was carrying a warhead from an anti-tank missile.

Assuming 12-inch diameter latex balloons, it would take 29 of them to handle a payload of a pound.

If Gaza terrorists wanted to send a 5 kg explosive - about the size of the explosives used by suicide bombers - they could do it with 315 balloons.

But it would be easier to obtain a much larger balloon.

These would require a lot of helium (or propane, which is probably easier available in Gaza but have only half the lift.) But there seems to be enough helium in Gaza already.

This is not a trivial issue.

We have lots of ideas, but we need more resources to be even more effective. Please donate today to help get the message out and to help defend Israel.
Elder of Ziyon at Sunday, March 10, 2019
‹
›
Home
View web version