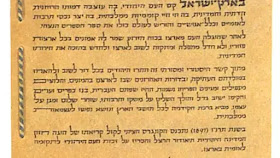 He is quoting conductor Daniel Barenboim, who makes the same laughable claim. Here's what he says:

I gave a speech at the Knesset, the Israeli parliament, in 2004 in which I spoke about the declaration of independence of the state of Israel. I called it “a source of inspiration to believe in ideals that transformed us from Jews to Israelis”.

I went on to say that this remarkable document had expressed the commitment that: “The state of Israel will devote itself to the development of this country for the benefit of all its people; it will be founded on the principles of freedom, justice and peace, guided by the visions of the prophets of Israel; it will grant full equal, social and political rights to all its citizens regardless of differences of religious faith, race or sex; it will ensure freedom of religion, conscience, language, education and culture.”

The founding fathers of the state of Israel who signed the declaration in 1948 considered the principle of equality to be the bedrock of the society they were building. They also committed themselves “to pursue peace and good relations with all neighbouring states and people”.

Seventy years on, the Israeli government has just passed a law that replaces the principle of equality and universal values with nationalism and racism. This law states that only the Jewish people have a right to national self-determination in Israel.

Barenboim is claiming that the new Basic Law is somehow superseding the Declaration of Establishment of State of Israel.

The Declaration also refers to Israel as the Jewish State. It also only gives Jews the rights of self determination in Israel:

THE STATE OF ISRAEL will be open for Jewish immigration and for the Ingathering of the Exiles; it will foster the development of the country for the benefit of all its inhabitants; it will be based on freedom, justice and peace as envisaged by the prophets of Israel; it will ensure complete equality of social and political rights to all its inhabitants irrespective of religion, race or sex; it will guarantee freedom of religion, conscience, language, education and culture; it will safeguard the Holy Places of all religions; and it will be faithful to the principles of the Charter of the United Nations.

The examples given by Barenboim where the Basic Law is supposedly racist are all in the declaration of independence that he praises.

Of course, Israel's other laws enshrine equality of all citizens. None of them are rescinded as a result of the Basic Law.

Barenboim is lying. Ken Roth is lying. The entire world cannot be bothered to actually read the texts before jumping on the bandwagon of calling the Jewish State racist.

I replied to Roth asking, "Ken, please name one specific thing the Basic Law denies Arab citizens of Israel that is allows Jewish citizens of Israel. Just one. Because I have yet to see anything. Please, enlighten us."

Of course he didn't answer. Because he can't. And neither can anyone else.

We have lots of ideas, but we need more resources to be even more effective. Please donate today to help get the message out and to help defend Israel.
Elder of Ziyon at Wednesday, July 25, 2018
‹
›
Home
View web version