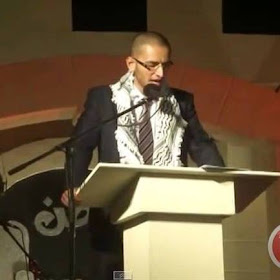 The spokesman for international media for Fatah, Ziyad Khalil Abu Ziyad, issued a statement denouncing US ambassador to the UN Nikki Haley.

He tried to insult her by saying she  "proved very well in her recent statements that she is [really the] ambassador for the Israeli occupation state."

Abu Ziyad said that the US was trying to split the Arab world but that the Arabs haven't accepted the "deal of the century." He warned against listening to the Israeli analysis and its false and misleading statements, which act as a fifth column to strike unity in the Arab-Palestinian political situation.

The most telling part of Abu Ziyad's message, though, was his praise for Arab states - for refusing to give full rights to Palestinians!

He stressed that no Arab leader has agreed to settle the refugees, for 70 years.

This was a compliment!

The Arab League insisted back in the 1950s that every Arab be eligible for citizenship in every Arab state - except for Palestinians. A 1959 resolution, number 1547, confirmed earlier resolutions that Palestinians in Arab lands must retain their "nationality" as a principle. (Of course, they are denied becoming citizens of "Palestine" today.)

Human Rights Watch is silent. Amnesty International is silent. Even though ordinary Palestinians have attempted to become full citizens of their host countries many times, in Lebanon, Egypt and elsewhere, their purported "leaders" have been dead-set against it, because they are afraid that happy Palestinians will no longer be Palestinian.

A Palestinian leader publicly praises Arab nations for discriminating against Palestinians - and no one thinks it is strange. Because the only reason for supporting this institutionalized discrimination is to use them as pawns to pressure Israel to accept them as "returnees" one day.

70 years of this apartheid is not only tacitly accepted by the world - it is actively supported. Because, after all, this is what UNRWA is all about: to maintain the fiction that Palestinians are refugees forever no matter how many generations they live with their loving Arab brethren.

The US even bringing up the topic is what is considered to be outrageous by the Palestinian leaders themselves.


We have lots of ideas, but we need more resources to be even more effective. Please donate today to help get the message out and to help defend Israel.
Elder of Ziyon at Wednesday, July 25, 2018
‹
›
Home
View web version