Samsung says Israel is in Europe, "Palestine" in the Middle East

Samsung has a webpage where you can choose what country you are in, divided up by region.

If you are in Israel and look for a Hebrew page by looking in the Middle East, you are out of luck. You'd have to search a little further down - into Europe.

Remarkably, Israel and "Palestine" are in completely different regions. Hebrew speakers of Israel apparently live in Europe while their Palestinian Arab neighbors are in the Middle East. 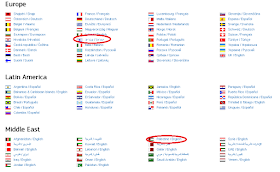 By itself, this isn't a big deal. But in the aggregate, the message being given by these sorts of things - UN regional memberships, sports leagues, and so forth - is that Israel doesn't belong in the Middle East.

It reinforces the Arab lie that Israel is a European colonialist outposts, not a nation in the Middle East that has more historical reason to exist there than any Arab nation in the Levant.

It reinforces the idea that Jews do not belong in the region, as every nation in the  Middle East section is a Muslim-majority country.

It tells the world that "Palestine" exists and is where it is supposed to be, while Israel is somehow taking up space in Palestinian land.

A website isn't a big deal - but it is a big deal. It legitimizes the idea that Israel  really should not exist in the historic home of the Jewish people.

We have lots of ideas, but we need more resources to be even more effective. Please donate today to help get the message out and to help defend Israel.
Elder of Ziyon at Tuesday, June 05, 2018
‹
›
Home
View web version