it wasn't that long ago that Israel was falsely accused of killing double-amputee Ibrahim Abu Thurayeh, after months of hateful lies.

The evidence indicates that someone on the Gaza side killed him, with his knowledge, presumably because his becoming a "martyr" would help his family financially, as well as the fact that is would be a huge PR victory for Hamas against Israel.

The case of medic Razan al Najar sure sounds similar to me.

* Israel has no interest in killing a medic.

* Hamas has been chomping at the bit for Israel to kill a poster child civilian; they thought that the 8 month old baby they accused of dying from tear gas would fit the bill but reporters messed that story up by asking questions about what happened.

* The Gaza riots are primarily a PR exercise meant to focus the world on hating Israel. But the weekly riots have been bringing diminishing returns.

* Razan al Najar posted in Facebook her last message: “I am returning and not retreating. Hit me with your bullets. I am not afraid.”

* Najar did not attend the riots to provide medical aid to the injured. Her main purpose of attending was to join the protest. 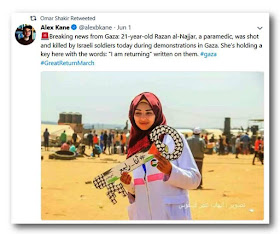 * There are some serious discrepancies in the stories of how Najar died, even among "eyewitnesses" - discrepancies that simply could not exist from actual witnesses (like where she was shot.)

I don't know if she was killed by an errant IDF bullet or by a Hamas bullet that was meant to create a new symbol of martyrdom to energize the riots. But to me, both those scenarios are worth investigating. There is only one side with incentive to see Najar dead, and it certainly isn't Israel's.


We have lots of ideas, but we need more resources to be even more effective. Please donate today to help get the message out and to help defend Israel.
Elder of Ziyon at Tuesday, June 05, 2018
‹
›
Home
View web version