Haaretz has an op-ed by an anonymous young man in Gaza whose story is tragic - but not for the reasons he, or Haaretz, thinks.

In Gaza, we also fall in love.

She was just 17 years old when she came to the educational center where I was volunteering as an English teacher. The head teacher asked her mother to choose the teacher who would instruct her daughter. But her daughter intervened. She pointed directly at me. I knew that would be the beginning of a love story.

Over the next eight months, she and I finally fell in love. Her family knew, but mine did not, because I knew my family was not financially ready for a marriage. Immediately, I realized the mistake I had committed by allowing such a deep attachment to grow.

I am my parents’ eldest son. They want me to marry so they can enjoy being grandparents, but they know that I don’t have a apartment to live in or a stable salary that would allow me, my wife and them to survive on. My father has been unemployed since 2005 when he, along with thousands of other Gazans, could no longer work inside Israel after its withdrawal. He became one of the 80% of all Gazans who depend on social assistance and international aid.

My girlfriend's parents loved me so much that they said they could not live without me. "If you ever leave us, you will kill our souls," her mom once told me. Her words made me cry for hours, because I already knew marrying her daughter would never happen.

I felt trapped between Scylla and Charybdis. I was afraid to be realistic and to tell her family that financial difficulties prevented me from marrying their daughter, and I was also scared to promise the girl and her family to wait for me, and for my situation to improve, because I did not want them to wait for years.

Between fear and hope, the relationship lasted for about two years, and she was almost 20 years old when her mother asked to meet me alone. I knew what her mother wanted to talk about. I met her in a restaurant in Gaza, popular with families, and she started talking about the social culture of Gaza  and how people regard young women when they pass the age of 20.

In Gaza, and in most of the Arab world, families consider girls over 20 as irredeemable spinsters. That means many have no chance of marrying - for several reasons. There is a gender 'surplus' of young  single women because so many young men immigrate to the West looking for jobs, because men disproportionately lose their lives in combat, and because men don't have the financial means to get married.

"You know my daughter will soon be 20, and I still don't know if you're intending to marry her." Her mother started her prepared speech. "You know we can wait for you for years, but your family should know and I need guarantees that you will indeed marry her!"

It was her right to say that, and that day I felt the most guilty and oppressive person on earth. I realized how much her family was attached to me, and how much they needed me to be one of them. I couldn't give my answer there and then. I asked her mother to give me a few days to think.

Gaza's difficult financial conditions, including an unemployment crisis that exceeds 45%, one of the highest in the world, stifle the chances of hundreds of marriages ever taking place. That has led to the proliferation of organizations that facilitate weddings. Their main role is to help people who don’t have the financial means to marry. Because every wedding in the Gaza Strip costs at least $8000, these organizations provide grooms opportunities to pay in comfortable installments over two or three years.

I thought of going to register at one of these organizations, but I was very hesitant. I knew that everyone in the neighborhood would know I married through them, and that it's considered shameful. I didn’t want anyone to talk badly about me. Moreover, I would not be able to pay the installments back, so I would fall in a dangerous financial trap; I would likely default, and I might even go to jail. So I eradicated the idea of marriage from my mind.

I called her mother, and told her that I would not let her daughter or her wait for me. I would not be able to marry for years. She cried over the phone several times, but I still felt I did the right thing.

That was two years ago. Until now my ex-girlfriend has refused every marriage proposal suggested to her. Her mom once called me and said that her daughter was suffering psychological difficulties. That day, I understood what living in the Gaza Strip means.

I don't want to dump on a person whose pain and love is real.

But listen to what he is saying. He is saying that his sense of shame at the idea of taking charity to afford a wedding is strong enough to ruin the life of the young woman he loves.

Even the article notes that around half of the people in Gaza are poor in one sense or another (even though there are quite a few social safety nets there - no one is starving and no one sleeps on the streets.)  Gazans have no shame whatsoever about accepting hundreds of millions of aid from the West.

But this young man - who loves and is loved by this young woman - is willing to let her become a spinster and to be alone the rest of her life because of his selfish, perrverted sense of shame.

The article is blaming Israel for his own selfishness and his conscious decision to abandon a wonderful woman and sentence her to a life of pain. Which is, when you think about it, the way the entire Arab world looks at Palestinians - choosing to hurt them and to use them to blame Israel. 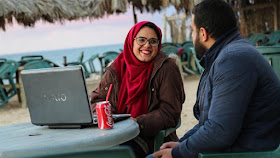 It doesn't have to be this way. Another young couple in Gaza who couldn't afford a wedding swallowed their pride, ignored the shame that permeates their society and crowdfunded their own wedding.  They are the exception that proves the rule.

The Arab shame culture that the West is so keen on ignoring underlies every decision made in that world, from the personal to the national. And (in the way it is manifested in the Arab world) it is inherently inferior to the guilt culture of the West that emphasizes personal responsibility. This article unwittingly illuminates what can only be described as a sick way of thinking that holds an entire society back. Instead of saying that he and his love can work together, help each other and swallow some pride in order to have the companionship and support and love that they need, he is saying that he is willing to destroy his love's life - because he is so afraid of the temporary shame of not being able to afford a stupid wedding that for some other stupid shame reason must cost $8000.

This is indeed "what living in the Gaza Strip means" and what living in the Arab world means. It is a perverted way of life that ensures generations of immature young men and young women are doomed to blaming the results of their self-destructive decisions on others.

They are the architects of their own misery  - but they will always blame the neighbors.

We have lots of ideas, but we need more resources to be even more effective. Please donate today to help get the message out and to help defend Israel.
Elder of Ziyon at Thursday, September 28, 2017
‹
›
Home
View web version