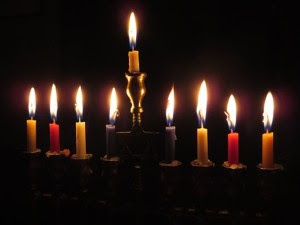 Jerusalem, December 21 - Religious leaders in the Muslim community across Israel warned today that if millions of Israeli Jews kindle their annual Hanukkah lights as planned beginning this Saturday evening, the act would constitute a violation of Muslims' religious right not to have to see anyone practicing a religion other than Islam.

A group of Sunni Imams and Islamic religious educators gathered in Jerusalem today to prepare a statement protesting the Ministry of Religious Affairs allowing Jews to light their candles and oil lamps in full view of Muslims, in some cases even tolerating the erection of candelabra tall enough to require a cherry-picker to light, visible as far as the eye can see. The group agreed that while they lack the political power to prevail upon the Jewish-run ministry to prevent millions of Jews from thus trampling Muslim religious freedom, they must at least register their objections lest their silence be taken as acceptance of such abuse.

"We Muslims in this land who have already known decades of persecution in the form of being prevented from implementing the Pact of Omar cementing our social and political dominance over non-Muslims, condemn the ongoing attempt by the Zionist usurpers of this Islamic land to assert that anyone but adherents of Islam may so confidently remain non-believers. Our community reserves the right to resist this onslaught of heresy by any means," read the statement.

Participants in the conference explained that in addition to the violation of their religious freedom that public display of Hanukkah lights represents, the environmental damage deserves consideration. "Here you have tens of millions of flames burning at once, releasing who knows ho much carbon dioxide into the atmosphere and contributing to global warming," admonished Duwas Assay, an Imam from Umm el-Fahm. Even in our city, where we are not plagued by the sight of Hanukkah lights or symbols everywhere, we will suffer the consequences of such wanton ecological negligence," he explained.

Others noted the hypocrisy of such garish displays of light at night, when others want to sleep. "There was almost a law passed last month banning the use of mosque loudspeakers for the pre-dawn call to prayer," recalled Aiwish Tuqilyu, a religious educator in Jerusalem's Jebel Mukaber neighborhood. "Supposedly, the concern was for people who wish to be asleep at that hour, as if anyone not coming to pray then has any right to object, or any worth at all as a human. Yet these same authorities do nothing about the assault on our senses of all this light shining from every Jewish window during nighttime hours. The hypocrisy stinks."