Lapid: he sure does have great hair (Judean Rose) 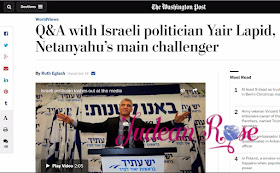 Love him or hate him, Bibi's all we've got at present. There really is no one else on the Israeli political spectrum who cuts such an appropriately statesmanlike figure as Benjamin Netanyahu. Which is why he's the second-longest running Israeli prime minister after David Ben Gurion. Israelis know that Bibi's it.

This doesn't mean that the other politicians aren't going to angle themselves into position for a takeover, hostile or otherwise. You'll always see Naftali Bennett , for instance, using any issue du jour as a platform to knock Bibi while at the same time taking credit for any progress made on said issue. Yair Lapid, too, is always looking for opportunities to advance his political fortunes. He has a knack for speaking and videos of his speeches always go over well on social media. Also: he has GREAT hair. 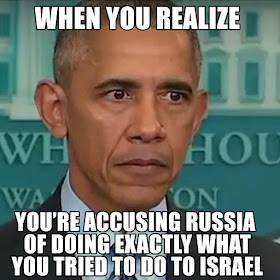 Now it's interesting to watch all this angling for power and position on either side of the Atlantic. We Israelis watch President Obama as he blames Russia for interfering with the American election. We find this especially ironic, considering that Obama's State Department interfered with Israeli elections to the tune of $349,276 in taxpayer's money.

So no. It's not a new idea: trying to find someone, anyone, who might take over from Bibi, if not now, then at some future point in time. And so Ruth Eglash's interview with Yair Lapid in the Washington Post makes perfect sense. Washington is looking for fresh Israeli blood. Someone malleable. Someone who, unlike Bibi, will do the left's bidding, and say, "Sir! Yes, Sir," when ordered to stop building Jewish homes, release Arab terrorists, and offer up another slice of Jewish land to the Arabs.
So you can just imagine this is thrilling stuff for Yair Lapid, he of the amazing hair, of the legendary MK father. An interview with the Washington Post! Lapid must have been over the moon. What a chance!

Now there were two key points in this brief interview that stand out. First of all, a dig at Israel and Netanyahu from reporter Ruth Eglash, who manages to insert the idea that Israel's leadership is the equivalent of the PA leadership and isn't making any real efforts toward a peace settlement. This is supposed to show balance and symmetry.

Eglash demonstrates this supposed symmetry by asking Lapid if he believes that in Mahmoud Abbas, Israel has a partner for peace. When Lapid confirms  that Abbas is no peace partner, that he's just more of the Tunis people, more of Arafat's ilk, and will never sign a deal, Eglash asks, "Isn’t the same true about the Israelis? In Israel, the same people have been saying the same things about the same peace deal for 20 years. Do we need to see a change in Israel before peace can be reached?"

So here's the thing. During Bibi's reign, settlement construction was frozen as per President Obama's bidding. This affected people I know, personally. People who were building homes had the construction stalled at length, and had to pay penalties because their homes were not ready when it was time for them to move according to the contracts they had signed. People could not add on to their homes to provide for the natural growth of their families. Not to mention, the idea has always been for the two sides of the conflict to meet WITHOUT PRECONDITIONS, for instance, without any construction freeze.

The construction freeze was flat out wrong. But Abbas demanded the freeze, Obama backed him, and Bibi felt forced to accede. Even though building homes has nothing to do with peace or the lack of same. As we saw with Disengagement, homes can easily be torn down and Jewish families expelled in the event that the State of Israel decides to do these things as part of a gesture of "peace."

This question so craftily posed by Eglash to draw a moral equivalency between the murderous PA and democratic Israel, was meant to make it sound as if Israel, like the PA, has done nothing for the sake of peace. But this is not true. Israel has made numerous concessions to the Arabs for the sake of peace, while the Arabs have made not a one. The settlement freeze, which, de facto lasted much longer than the ten months demanded, was one such concession. But there have been many.
And the PA? They have made not a single concession for the sake of peace. They will not even recognize the State of Israel. Meantime, the PA's Facebook page, and official television station are used to incite terror against Israeli citizens.

But here is Eglash. She wants to draw some kind of symmetry between the Arabs and the Jews and how little they've done to make peace? Frankly, it makes the bile rise in one's throat. The lack of peace is due to the presence of terror. Arab terror. Against the Jews. Jews like Eglash.

These are the things Lapid, oh he of the great hair, could have and should have said. It was an opportunity, one handed to him on a platter by Eglash, on behalf of that bastion of the liberal media, the Washington Post. Right here, at this point, was where Lapid could have redeemed himself, shown us that he can someday step into Bibi's shoes and be a leader worthy to rule the great nation of Israel.

And here is where he utterly failed.

Instead, he of the great hair reverted to type and became a politician, grandstanding, angling for his piece of future pie. He said:

"Since the Oslo accords, there have been 11 rounds of bilateral talks and all of them came out to the same nothing. It was the same people, saying the same things to each other."

Translation: All of these leaders of Israel haven't managed to create peace. They are failures. (As if the PA were not the responsible party for the absence of peace!)
He said:

"If we are going to do this, then there needs to be a different mechanism. Since last September, I have been pushing a new concept, a regional conference that will include many of the players who are involved anyway — Egypt, Jordan, Saudi Arabia and the gulf states."

Translation: You need someone new. You need ME. I have a new idea. (Which actually isn't new and is predicated on the cooperation of all the Arab allies that Bibi has cultivated while serving in office as prime minister.)
He said:

"And, we need to start with Gaza. Gaza is a simpler deal. There are no Jews in Gaza, no holy sites. We will not talk to Hamas, but with regional players present, we will have moderators to talk through. If we start in Gaza, we will have a win. I think the entire area needs to see progress."

Translation: Let's move the conflict to a different arena and pretend this will make a difference. (Certainly sounds good if you don't look too closely or demand any details.)

So basically you have Lapid boasting that he can do what Bibi cannot just by changing the venue, the words, the players. Boasting. Instead of backing his prime minister or his people.  During an opportunity to make Israel look good in the Washington Post. An opportunity scorned.
But okay, he was led. He was asked a leading question. And he's a politician and ran true to type.
Alas, it got worse. Much worse.

Eglash asked, "Netanyahu boasts about how Israel is now getting along with the rest of the world; he says he is 'optimistic' about relations he has cultivated in Africa, Eastern Europe, Asia, but surely the only relationships that really matter diplomatically are those with the United States and Europe?"
Eglash paints Netanyahu as boastful. She makes him sound stupid because he doesn't know that the only real players (according to Eglash) are the U.S. and Europe. Yet in her rude question that knocks the leader of an American ally in a major American news outlet is a second chance. A chance for Lapid, he of the great hair, to say staunch and supportive words to back the foreign policy of his country's leader.  To say something good and positive about Israel and the tack it is taking on the world stage.

Instead, Lapid takes the bait and takes a stab at Bibi. He says, "Without criticizing the prime minister, I will say there is a difference between how you handle trade policy and foreign policy. Trade policies deal with everyone everywhere in the world, but foreign policy is subjective. It is dependent on three places — Washington, Brussels and international institutes. This is where the game is played, so if you are in the game, then you have to make sure you are on good terms with all these three."

For all that Lapid and his party are part of the opposition, there comes a time when supporting your people trumps party lines and politics. If Lapid had unequivocally backed Bibi in this interview, it would have told Israelis (and Americans!) something important: that here is a man of quality and substance—someone who might one day fill Bibi's most substantial shoes.

Alas, we came away knowing that the only thing to know about Lapid is what we already knew:

He sure does have great hair.