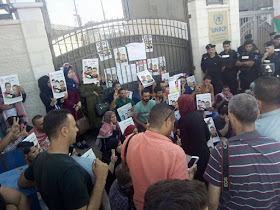 A group of protesters have closed the main offices of the UN in Ramallah to protest the lack of support for a Palestinian hunger striker.

Bilal Kayed started his hunger strike when he was placed in administrative detention the day he was scheduled to be freed from prison after a 14 year sentence.

Other prisoners joined the hunger strike as well.

According to Arab media, Israel has said that the administrative detention was necessary based on evidence that Kayed intended to go back to terrorism upon release. 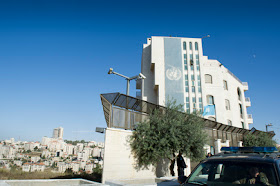 Kayed is a member of the PFLP terror group.

Palestinian protesters often target the very agencies who are the most on their side, thereby hurting their own people when they close the offices.  They have closed UNRWA and ICRC offices recently.

In this case, the target was the United Nations Ramallah Common Premises, a large building where numerous UN agencies are concentrated. Since the UN has so many separate agencies working from its obsession with demonizing Israel, it decided to consolidate them to work in one building.

Ironically, only two days ago the UN has quite publicly criticized Israel for its use of administrative detention against Kayed specifically.

Once again, Palestinians are shooting themselves in the foot because they would rather blame any Westerners for their problems than to actually wonder whether it helps their cause to have so many terror groups freely operating under their noses.

We have lots of ideas, but we need more resources to be even more effective. Please donate today to help get the message out and to help defend Israel.
Elder of Ziyon at Monday, August 22, 2016
‹
›
Home
View web version