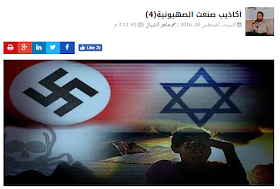 Part one denies that Jews are a people altogether, claims that Ashkenazic Jews are Khazars,

Part two says that the Jews use the myth of being called "the chosen people" to manipulate the world to do their bidding.

Part three denies that Israel is the Promised Land, and says Jews have no particular historic attachment to the land.

Part four, published yesterday, denies the Holocaust, quoting famous Holocaust deniers like Fred Leuchter, David Irving and Ernst Zundel. It claims that "experts" like Leuchter proved that there couldn't have been any gas chambers and that there were only 3 million Jews in Europe before World War II.

Wattan News, a Palestinian TV network, has been republishing these articles.

But don't call them antisemites.

Denial that Jewish people exist and that Jews were slaughtered by the Nazis are framed as if they are merely anti-Zionist positions.


Meanwhile, Arab media are complaining that Arab refugees in Germany are being escorted to the sites of death camps to learn a little history, and are being scolded by their tour guides when they try to compare Israeli actions to those of the Nazis.

We have lots of ideas, but we need more resources to be even more effective. Please donate today to help get the message out and to help defend Israel.
Elder of Ziyon at Sunday, August 21, 2016
‹
›
Home
View web version