Malay pol to opponent: "Stop being bigoted, you Jew-lover!" 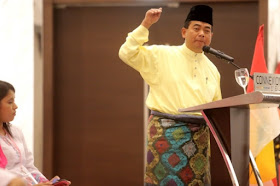 Not a bit of irony detected in this news article from The Malay Mail Online:


SABAK BERNAM, June 16 — Umno lawmaker Datuk Abdul Aziz Kaprawi alleged today that the Pakatan Harapan alliance was pitting Malays and Chinese against each other to create racial tension that would somehow lead to their electoral victory in Saturday’s twin polls.

The Sri Gading MP cited as example the racial billboards that had been put up by the federal opposition pact in Sekinchan last week in the run-up to the Sungai Besar parliamentary by-election. The controversial billboard has since been removed by the local authorities.

“They’ve run out of models to win. They are playing with racial sentiments to provoke anger. We are a multiracial nation and we need to tolerate one another. What is important is for each race to live together in peace,” Abdul Aziz told reporters after attending a function in Sungai Besar.

The Umno supreme council member alleged further that the Parti Amanah Negara-DAP-PKR pact was backed by Jews and urged Malaysians to reject the federal opposition to maintain peace within the country.

“We know that there are many Jewish elements aiding them in many ways and we don’t want any external involvement in the management of this nation,” Abdul Aziz said, without stating the basis for his allegation.

We have lots of ideas, but we need more resources to be even more effective. Please donate today to help get the message out and to help defend Israel.
Elder of Ziyon at Friday, June 17, 2016
‹
›
Home
View web version