As Palestinians claim "genocide," their reported population keeps going up

The Palestinian Central Bureau of Statistics came out with their year-end population figures.

Last year they counted 12.1 million, meaning that despite Israel's supposed attempts at genocide, somehow some 270,000 more Palestinians managed to appear in just one year.

However, the Bureau's methods of counting people seem to be less than scientific.

For example, every year, they release the percentage of the population in the territories that are "refugees."

Does this make any sense? 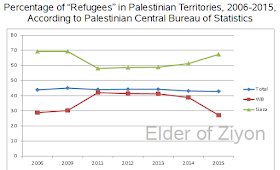 There is no rational way to explain such wildly divergent numbers among a statistic that should be largely static if you assume reasonably consistent population growth between refugee and non-refugee populations.

So all of the PCBS' population figures must be considered equally unreliable.

We are doing everything we can to fight for Israel with hard work, research and - above all - the truth. We need your help.
Please donate today.
If you have other skills you can volunteer for EoZ, send an email to volunteer@elderofziyon.com
Elder of Ziyon at Thursday, December 31, 2015
‹
›
Home
View web version