Even when Egypt "opens" Rafah, hardly anyone gets through


Egyptian authorities on Thursday closed the Rafah crossing after it had been temporarily opened for three days.

Palestinian crossing officials told Ma'an that 830 Palestinians in Gaza used the crossing, which was reopened on Tuesday.

There was no indication from Egypt when it will be reopened again.

On Monday alone (the last day I have statistics for,) Israel allowed 1,246 people to use the Erez crossing, with only slightly smaller numbers for the previous day. That's over four times the numbers of people allowed to cross rafah each of the three days it was open, even with a huge backlog of people trying to go to Egypt (and return to Gaza.)

How about humanitarian aid?


Egyptian authorities on Wednesday were preparing to ship large quantities of humanitarian aid from the United Arab Emirates to the Gaza Strip.

An Egyptian security official told Ma'an in Cairo that 175 tons of humanitarian aid from the UAE arrived Tuesday evening at El-Arish in North Sinai district. 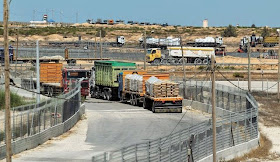 The shipment includes food, medicines and medical equipment. The cargo was then shipped to the Egyptian side of the Rafah crossing to be delivered to the Gaza Strip.

On Tuesday, 30 tons of humanitarian aid from Saudi Arabia were delivered to the Gaza Strip as well as 13 packages of medical aid from the Egyptian Red Crescent Association.

The Kerem Shalom crossing from Israel, meanwhile, has been transferring about 12,000 tons of goods every day.

Compared to Egypt, Israeli's border with Gaza is positively porous.