Why do BDSers hate Palestinians? 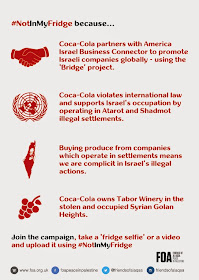 On December 20, A UK group called "Friends of Al Aqsa" started a campaign to boycott Coca Cola, with the hashtag "#NotInMyFridge," because it allegedly supports Israeli crimes, or something.

Their timing was exquisite.

Emad al-Hindi, director-general of the Palestinian National Beverage Company which produces the soft drink in the occupied West Bank, said 10 truckloads of machinery had arrived in Gaza via a crossing with Israel.

Israel confirmed it had allowed nine truckloads from Jordan to reach Gaza for an enterprise it hoped would provide jobs for hundreds of people in the coastal territory.

Hindi said he expected more equipment to be shipped from Germany and Turkey and hoped the machines would be installed at a location in central Gaza by March "so that we can launch operations before the end of 2015."

"The factory building is ready, lines of produce are ready," Hindi said, adding "we hope to be able to conclude all the stages without any obstacles."

This is not the first time that BDS proponents are acting contrary to what Palestinian Arabs actually want. Besides being against Sodastream, which employed 850 Arabs in the West Bank, we have seen BDSers call to boycott agricultural goods farmed by Palestinians and exported to Europe. Hell, Gazans even eagerly buy and eat Israeli Chanukah chocolate coins!

BDS proponents want to ensure that actual real Palestinians in the territories are jobless, poor and miserable. They are against anything Israel does to help ordinary Arabs in the WB and Gaza to prosper.

Why do they hate Palestinians so much?

Because real Palestinians are a roadblock to the BDS desire to destroy Israel!

Only angry, miserable Palestinians are assets to these haters. Because, to the BDS leaders, the only purpose Palestinians serve is as cannon fodder, as pawns to be manipulated. They are not human beings. Nothing makes the BDS crowd happier than photos of dead Palestinian kids because of the PR value.

So they raise money to supposedly help the Palestinians when in fact they want them all to die for their cause, preferably on camera.

This is why "win/win" is not in their vocabulary. If Israel gains, then by definition the people who are psychotically against Israel's existence lose.

And that goes double when both Israel and Palestinians win, as with the Gaza Coke plant - an initiative that Israel approved, that Hamas has no problem with, and that the "friends of Al Aqsa" bitterly oppose.