Evidence Iran is working on a plutonium bomb 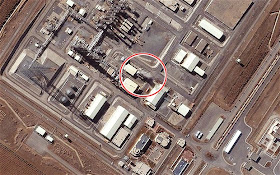 The Telegraph can disclose details of activity at a heavily-guarded Iranian facility from which international inspectors have been barred for 18 months.

The images, taken earlier this month, show that Iran has activated the Arak heavy-water production plant.

Heavy water is needed to operate a nuclear reactor that can produce plutonium, which could then be used to make a bomb.

The images show signs of activity at the Arak plant, including a cloud of steam that indicates heavy-water production.

Inspectors from the International Atomic Energy Agency have been unable to visit the facility since August 2011 and Iran has refused repeated requests for information about the site, which is 150 miles south-west of the capital, Tehran.

Western governments and the IAEA have held information about activity at Arak for some time.

But today’s exclusive images are the first to put evidence of that activity into the public domain.

The striking image of steam over the Arak heavy-water complex is a vivid demonstration that the regime has more than one pathway to a potential nuclear weapon....[T]he new images of Arak highlight the progress Iran has made on facilities that could allow it to produce plutonium, potentially giving the country a second option in developing a nuclear weapon.

Other images of the area around Arak show that numerous anti-aircraft missile and artillery sites protect the plant, more than are deployed around any other known nuclear site in the country.

The missile defences are most heavily concentrated to the west of the plant, which would be the most direct line of approach for any aircraft delivering a long-range strike from Israel.

The Arak complex has two parts: the heavy-water plant and a nuclear reactor.

Unlike the heavy-water plant, the reactor has been opened to examination by inspectors from the IAEA.

The country still lacks the technology to reprocess plutonium and use it for a weapon.

But North Korea has successfully developed that technology, and some analysts speculate that Iran could do the same.


Because they do not require uranium enrichment, heavy water reactors are of concern in regards to nuclear proliferation. The breeding and extraction of plutonium can be a relatively rapid and cheap route to building a nuclear weapon, as chemical separation of plutonium from fuel is easier than isotopic separation of U-235 from natural uranium.

...Due to its potential for use in nuclear weapons programs, the possession or import/export of large industrial quantities of heavy water are subject to government control in several countries. Suppliers of heavy water and heavy water production technology typically apply IAEA (International Atomic Energy Agency) administered safeguards and material accounting to heavy water.