Egyptian cleric: Christianity started as worshiping Jesus' penis, and it gets better

Following are excerpts from an address by Egyptian cleric Abu Islam, which aired on Al-Omma TV (via the Internet) on Feburary 13, 2013.

Egyptian cleric Abu Islam: I swear to God the Almighty – and believe me, I am not lying – that the Church worship originated in the worship of the penis. I swear to God. This is documented in dozens of pictures.

Let me tell you something – it's indecent, but true. Take a look at a picture of Jesus, and you'll see a penis, right here. Or is it on this side? Oh, it's on the right side. A penis, right here. There are many pictures like this. They worship it.

The face he makes when he conjures up a mental picture of Jesus' penis is nothing short of hilarious. 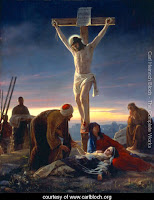 By the way, isn't there a law that Muslims like to demand that makes defamation of religions illegal? Anyone think Abu Islam has been arrested in the past two weeks?

Since I can't help myself, I looked up the actual image behind Abu Islam to see if I could discern a penis. I couldn't, but perhaps the more imaginative of my readers can find it (click to, um, enlarge.)