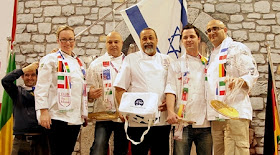 An Israeli team of bakers won two first-place awards at the International Baking Championships held in Rimini this past week.

Based on these results, the Israeli team was declared the winner of the champtionships, with the Germans coming in second place and Australia in third.

While this is hardly an important news story, I have a question for those who call themselves "pro-Israel" but who manage to spend their entire days trying to dig up whatever dirt they can on the Jewish state.

When you read a story like this, are you proud?

People who are truly pro-Israel would feel a sense of pride, even if only a little, at the idea of the Jewish state winning a baking championship while competing against heavyweights like the US, France and Germany. They would feel the same way when Israel wins medals in the Olympics or when an Israeli wins a Nobel Prize.

Those who only pretend to be pro-Israel would not. They would studiously ignore the story, or try to find a reason why it is not such a good thing, or even try to frame it as if it proves some calumny or another about the state they pretend to love.

A look at the tweets of many of the so-called "pro-Israel" critics leaves one with no doubt as to how most of them really feel.