Al Arabiya (Arabic) just discovered the shocking truth that every visitor to Israel knew already: Arab shopkeepers sell items to tourists that include things that tourists might want to buy, including Jewish-themed jewelry!

The newspaper is upset: 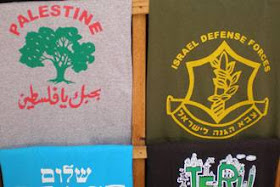 At a time when the Palestinians are struggling to preserve the identity of the city of Jerusalem and the stabilization of the right to be the capital of the State of Palestine, some of the Palestinians are promoting Jewish religious symbols within the walls of the Old City in East Jerusalem.

In the old city of Jerusalem, which contains Islamic and Christian significance, one can find the Star of David flag of Israel and the menorah (which is the logo of the Jewish State) and other Jewish symbols, taking considerable space in stores of some Palestinian merchants in Jerusalem.

These are the symbols to denote the "holy land" and the Zionist concept of the "Promised Land", with this inscription on some gifts and souvenirs, which means that the Palestinians are promoting goods that serve the idea of a Jewish Jerusalem. 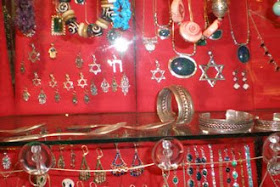 Khalid Salfiti, a storeowner, justified that traders sold some of the symbols of Israelis. "These are tourists we are dealing with. Unaware of the political consequences, there are tourists from foreign countries and Jews wandering in the market and looking for some of these symbols and, therefore, it must be made available to them in our stores. "

For his part, Abu Muhammad, who declined to disclose the full name, said this work is forbidden, and therefore "we must refuse to deal with it because it was contrary to religion and conflict with the rights of the Palestinian people."

Clerics urged Muslims and Christians not the promote these goods.

Sheikh Mohammed Hussein, mufti of Jerusalem, told Al Arabiya, "that we may promote the symbols which are not recognized by the Islamic faith. We consider the symbols of the Islamic faith as true...What is happening in the markets of Jerusalem is forbidden to the traders, the same way we would outlaw the sale of alcohol, pork and Satanic symbols and other taboos."

The article, in the mainstream London-based Arab newspaper, makes it clear that Muslims cannot even countenance the idea that Jews - not Israelis, but Jews - have any historic or religious ties to Jerusalem.

They have no problem promoting Christian symbols, only Jewish ones, so it is not a pro-Islamic position - it is pure Jew-hatred, to the point of falsifying history to exclude Jews from Israel.

It also makes clear that the Arab goal is to make Jerusalem Judenrein again, the way it was when it was under Jordanian rule.
Elder of Ziyon at Monday, June 29, 2009
‹
›
Home
View web version