75 years ago: Another forgotten massacre of Jews 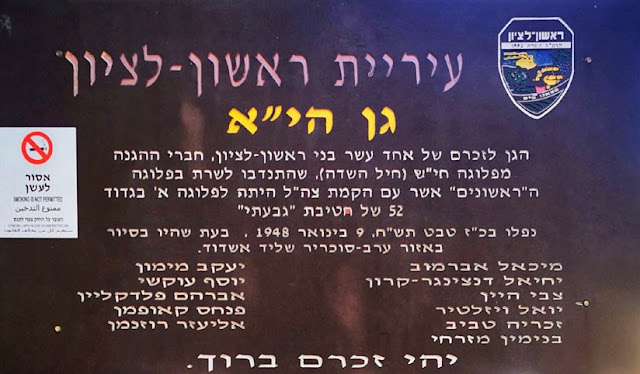 From The Palestine Post, January 11, 1948, referring to events from the previous Friday, January 9: 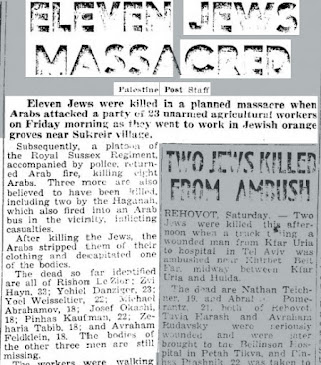 Eleven Jews were killed in a planned massacre when Arabs attacked a party of 23 unarmed agricultural workers on Friday morning as they went to work in Jewish orange groves near Sukreir village .
After killing the Jews, the Arabs stripped them of their clothing and decapitated one of the bodies.
The dead so far identified are all of Rishon Le Zion ; Zvi Hayn, 33; Yechiel Danziger, 23; Yoel Weisseltier , 22 ; Michael Abrahamov, 18; Josef Okashi, 18;  Pinhas Kaufman, 22 ; Zeharia Tabib, 18 ; and Avraham Feldklein, 18 . The bodies of the other three men are still missing.
During Friday night, well motors in four Jewish orange groves near Sukreir were  blown up .

It looks like the dead were not orange grove workers but a Haganah patrol. There is a garden in Rishon LeTzion in their memory (sign above.)
In Benny Morris' Birth of the Palestinian Refugee Problem Revisited, he reports that the Haganah leveled the village of Sukreir (Suqrir) on January 11 in retaliation after the entire village evacuated. 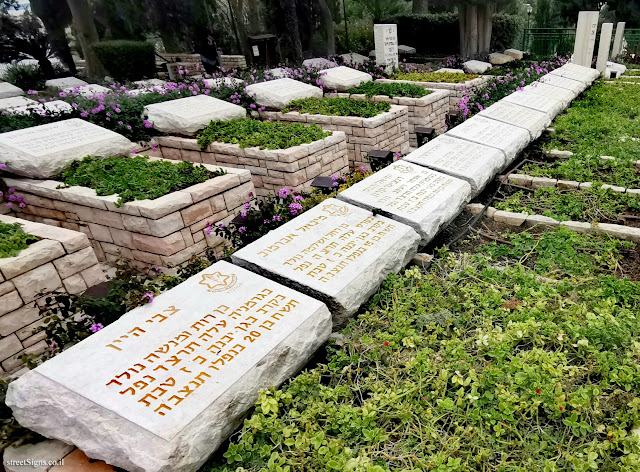