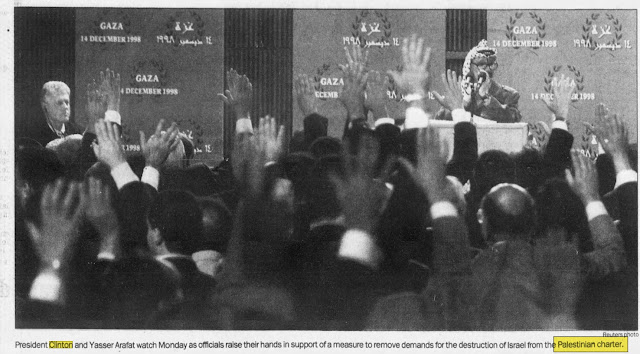 On this day in 1998, President Bill Clinton was bamboozled by Yasir Arafat into believing that the PLO had changed its charter.
The very moment of the sham was captured in the photo above, as a roomful of Palestinians in Gaza pretended to vote to rescind the articles of the charter that called for the destruction of Israel.
We know that the charter never changed. The 1968 Palestinian National Charter calling for the destruction of Israel is still on the PLO website. It is still on the official Palestinian Authority press agency site. And no charter without those clauses has ever been published.
It still says, "The partition of Palestine in 1947 and the establishment of the state of Israel are entirely illegal, regardless of the passage of time." It still says, "Palestine, with the boundaries it had during the British Mandate, is an indivisible territorial unit." It still insists on the "liberation of Palestine" including the destruction of Israel.
There is another way to know that there was no vote on December 14, 1998.
Heba Beydoun researched the incident in 2020, and compared the "vote" with what the PLO's own rules say are needed. She proves beyond a doubt that the entire roomful of people were play-acting for Clinton.
The only entity that can change the charter is the Palestinian National Council, in an official meeting.
That 1998 gathering is not counted as an official meeting of the Palestinian National Council, which didn't meet between 1996 and 2009.
The official invitation to the meeting didn't indicate that it was anything other than a gathering to listen to Clinton speak. It never claimed to be a Palestinian National Council meeting. Unlike official meetings, there was no opening session, no count of a quorum, no agenda, the president and vice presidents of the National Council did not attend as they must, the secretary didn't lead the session, there was no final statement at the end of the meeting, and it was never recorded among the records of official National Council meetings.
Many of the people who did attend and "voted" were not even members of the PNC - Arafat handed out invitations to members of terror groups and others to fill the room to make it look more impressive for Clinton.
Moreover, many of the other requirements for amending the charter never happened. The Palestinian National Council didn't form a committee to amend the Charter, and the proposed charter was never referred to the Legal Committee in the Council for consideration, and the Palestinian Central Council had not met for to discuss the issue, even though Arafat claimed that it had before the sham vote.
It was no accident. It was theatre, clearly planned by Arafat to deceive the President of the United States. And boy, was Clinton deceived. He said in his speech immediately afterwards:

I know the way is often difficult and frustrating, but you have come to this point through a commitment to peace and negotiations. You reaffirmed that commitment today. I believe it is the only way to fulfill the aspirations of your people and I am profoundly grateful to have had the opportunity to work with Chairman Arafat for the cause of peace, to come here as a friend of peace and a friend of your future, and to witness you raising your hands, standing up tall -- standing up not only against what you believe is wrong, but for what you believe is right in the future.
...I thank you for your rejection -- fully, finally and forever -- of the passages in the Palestinian Charter calling for the destruction of Israel. For they were the ideological underpinnings of a struggle renounced at Oslo. By revoking them once and for all, you have sent, I say again, a powerful message not to the government, but to the people of Israel. You will touch people on the street there. You will reach their hearts there.

Palestinian leaders think that they can say one thing in Arabic and another in English, they can lie with impunity to the West, and they will get away with it, with no real consequences. They even believe that they can create an entire fictional drama, complete with actors, to fool the entire world into believing a fiction.
History shows that they are correct. They did it with Clinton, they did it with Al Dura, they do it with "Pallywood," even today the English pages of their media portrays them as innocent victims while the Arabic pages say they are mighty soldiers planning to annihilate the Jews. 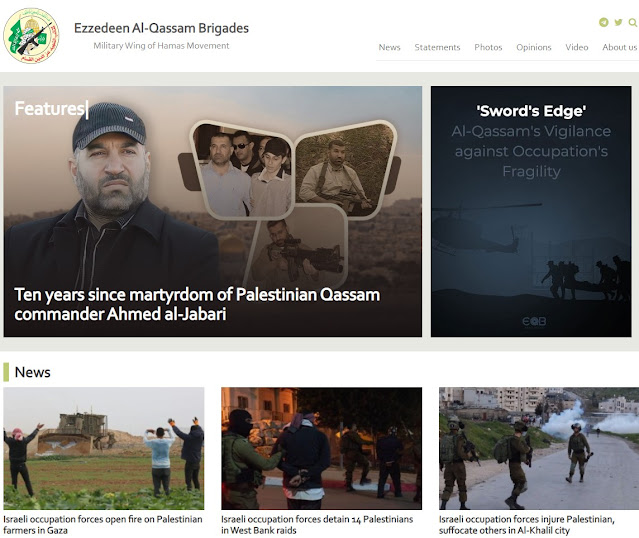 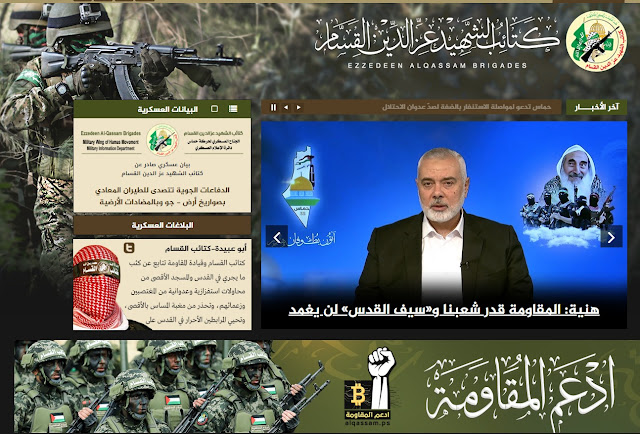 The West keeps getting fooled because they want to be fooled. The Palestinians have learned this lesson well.