There have been many different excuses given for hatred of Jews over the millenia.
Pharaoh: "Let us deal shrewdly with them, so that they may not increase; otherwise in the event of war they may join our enemies in fighting against us and rise from the ground."
Haman: "[Their]  laws are different from those of any other people and [they] do not obey the king’s laws."
Voltaire: “The Jews are an ignorant and barbarous people, who have long united the most sordid avarice with the most detestable superstition and the most invincible hatred for every people by whom they are tolerated and enriched.”
Luther: "Wherever they have their synagogues, nothing is found but a den of devils in which sheer self-glory, conceit, lies, blasphemy, and defaming of God and men are practiced most maliciously and veheming his eyes on them."
Marx: "What is the worldly religion of the Jew? Huckstering. What is his worldly God? Money."
Wagner: "[The Jews is] incapable ... of artistic expression, neither through his outer appearance, nor through his language and least of all through his singing."
Wilhelm Marr: "Jewry has ...corrupted all society with its views. It has driven out any kind of idealism, possesses the controlling position in commerce, infiltrates increasingly into state offices, rules the theater, constitutes a sociopolitical phalanx, and finally has left you little more than the hard manual labor that it always despised. "
For most of these, the hate of Jews came before their theories and justifications for their hate, but they tried to create a consistent philosophy that would allow them to justify the hate and not feel like monsters. 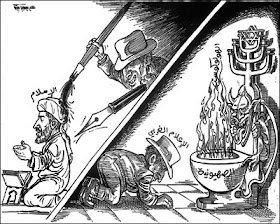 Palestinian antisemitism has no such interest in consistency. It isn't a philosophy. It freely steals from any and all other flavors of antisemitism, even those that contradict each other. As long as someone has something to say against Jews, the Palestinians will parrot it.
Palestinians have embraced traditional Muslim antisemitism where Jews are considered liars and betrayers of prophets since Biblical times. Yet they also embrace the antisemitic Khazar theory that says that most Jews aren't real Jews to begin with.
Palestinians have denied the Holocaust, but when it is convenient they compare Israel to Nazis - and then pivot again and claim that they are the real victims of the Holocaust.
Palestinians attack Jews as a people, as a nation, as a culture, and as a religion. But they also claim that the Jewish people do not exist, and it is only a religion.
Palestinian articles will describe the absolute Jewish control over the world, but they also write how Jews are as weak as a spider web and frightened Jews will run away from Israel as soon as they encounter any resistance.
They say they are not antisemitic and that they respect Judaism as a sacred religion, but just today, not for the first time, the official Palestinian news agency referred to everyday Jewish prayer as "racist Talmudic rituals."
The far-Left PFLP and the Islamist Hamas and Islamic Jihad have no public disputes over their contradictory philosophies. Their worldviews have almost nothing in common. But what they have in common is considered far more important than the philosophies that separate them: they both hate Jews. The far-Right Islamists will happily borrow the far-Left language of "racism" and "apartheid" even though they are far more guilty of those crimes; the far-Left will enthusiastically sign on to "defending Jerusalem from being Judaized" even when they are ostensibly atheist. They have allied and cooperated in terror attacks against Jews.
Palestinians claim a Jewish state is racist while they say they want an Islamic-based, pure Arab state of their own. They say that Jews practice apartheid towards Arabs but they want hundreds of thousands of Arabs to move to Israel  to live in that environment.
The only consistency in Palestinian philosophy is their hate for Jews.
Elder of Ziyon at Tuesday, November 08, 2022
‹
›
Home
View web version