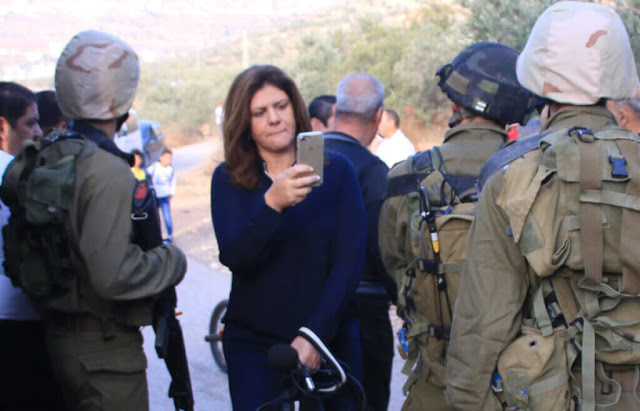 Renowned documentary filmmaker Pierre Rehov has released a film on the death of Shireen Abu Akleh that casts doubt on whether it was an IDF soldier that killed her.
It is called "Lies and Tears."
Using some of the evidence I had uncovered, and with some additional expert testimony, Rehov looks at the events in Jenin that day with a critical eye. He interviews Palestinians who themselves think that the Palestinian Authority had the incentive and means to murder Abu Akleh.
The summary of the film:

UNPRECEDENTED CAMPAIGN: Since 1990, 2658 journalists have been killed in the line of duty. None of them has had the media coverage of Shireen Abu Akleh. The well-organized campaign launched by the Palestinian Authority around her death has almost no precedent.
UNFOUNDED ACCUSATION: Assuming that an Israeli soldier was really responsible for the death of the Al Jazeera journalist, the accusation that it was a deliberate shooting is unfounded. The film shows that at such a distance no one could see the “press” sign on Shireen’s bulletproof vest. Palestinian gunmen were firing at Israeli soldiers from all directions.
FALSE WITNESSES: The “witnesses” who were at the scene and first to accuse Israel of murder are claiming to be impartial journalists. They are, in fact, propagandists of the Palestinian Authority, as the film clearly shows.
DISTORTION OF FINDINGS: CNN, The Washington Post and Bellingcat, called on Professor Maher, a forensic specialist and sound analyst, to define the distance between the journalist and the shooter from videos shot at the time of the tragedy, but they distorted his report to accuse the Israeli army. Professor Maher’s analysis, which Rehov also obtained, describes a distance between the sound recorders and the shooter, not between the journalist and the shooter. This “detail” leads to a difference of more than 20 meters which places the shooter further north of the army’s most extreme position. Yet, this critical detail has been glossed over in all the official versions, concluding that Israel is responsible.
Professor Maher’s calculation was made for an M4, a weapon frequently used by Israeli soldiers. But if the bullet was fired from any other weapon with a longer barrel, the distance shortens again and places the shooter more than 40 meters north of the Israeli position.
OMMISSIONS: Witnesses, including one of the “journalists” who was near Shireen Abu Akleh at the time of the tragedy, mention the presence of gunmen in a house not far from them. These testimonies have never been taken up by the media. They describe “snipers,” but the film formally demonstrates that it was impossible for Israeli “snipers” to have been in these positions. There were men shooting at the journalists from the buildings. They could not be Israelis. So, who were they?
EXPERT TESTIMONY: The film gives the floor to high-level international experts, including a French GIGN officer, court-appointed forensic expert Alain Artuso, and physicist Nahum Shahaf. Each of them, according to their expertise, points out several mistakes made by those who accuse the Israeli army.

At this point the IDF has all but admitted that it was their own soldier who shot Abu Akleh, and Rehov doesn't include in his distance analysis the additional factor of the extra time from the shockwave to the microphone which could indeed potentially include the place the IDF was known to be. Nevertheless, the idea that the IDF would deliberately kill a journalist is shown here to be as absurd as possible. And the "experts" from Bellingcat, AP, the NYT and Washington Post based their distance estimations on wrong data.
Rehov is also the first one to include my findings that there were Palestinian snipers in houses and on roofs.
It is worthwhile to watch.
(h/t Ian)
Elder of Ziyon at Thursday, November 17, 2022
‹
›
Home
View web version