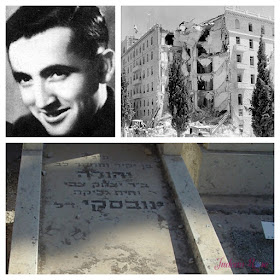 Ninety-one people were killed in the King David Hotel bombing of July 22, 1946. Fifteen of them were Jews. One of those Jews was my 28-year-old cousin, Yehuda Yanovsky. He’d gone to the hotel that day to invite his former co-workers to his engagement party, to be held that evening.

Yehuda had clerked for the British, a fact that made him a reviled figure in the eyes of much of the family. They saw him as a traitor compared to say, his Aunt Leah who went to America and on her return, smuggled in guns for the Etzel, under her clothes. Yehuda didn’t care. He’d hitched his star to the Brits to the point that after some years at his desk job at the King David, Yehuda had volunteered for the RAF. Now home from the war, he was all set to marry his sweetheart.

It was not to be.

That, however, was not the fault of the Etzel (Irgun Tzvai Leumi). Headed by Menachem Begin, the paramilitary organization founded by Zeev Jabotinsky had done everything in its power to minimize casualties. Warning calls were made to the Palestine Post (today the Jerusalem Post), the French Consulate, and the hotel desk, 22 minutes before the bombing. The Palestine Post subsequently reported the warning to the police. The French Consulate, located next door to the hotel, heeded the warning and as directed, opened the windows to prevent them from shattering in the blast. The Etzel itself herded the hotel staff into the kitchen and shooed them out the door, ten minutes before the bombing occurred. But whoever was manning the hotel switchboard that day, chose to ignore the warning and as a result, 91 people died that day, including my cousin Yehuda.

From that day forward, Menachem Begin would forever be branded “that terrorist” by those on the Israeli left. The Likud Party, too, the party founded by Begin and headed today by Benjamin Netanyahu, was (and in some quarters still is) thought of as a party of terrorists. Outside of Israel, the anti-Israel crowd loves to point to the King David Hotel bombing as the perfect example of Jewish terror, which they say, is no different than Arab terror, except the diabolical Jews get a pass in the eyes of the world.

You might be tempted to point to the sheer number of Arab terror attacks (and attendant casualties) as the thing that distinguishes them from this single episode of a Jewish hotel bombing. But that is not what makes them different. For while the antisemites like to pretend that the King David Hotel bombing is no different than, for example, the Arab bus bombings of the 1st Intifada, or the Sbarro Pizzeria Massacre, they aren’t fooling anyone. Go ahead, recite the death count of the King David Hotel bombing all you want, but no Arab terrorist ever gave a Jew advanced warning prior to an attack. No one told Malki Roth to leave her pizza and run. Unlike Menachem Begin’s Etzel, which gave multiple warnings to multiple parties and evacuated the hotel’s personnel to safety.

Menachem Begin was no terrorist. The British were the terrorists. They turned their backs in Hebron and Safed as Arab terrorists murdered innocent men, women, and children, including my husband's cousin Jacob Wexler. They imprisoned Jews and hung them when they tried to defend themselves against Arab terror.

If only the world would mind its own business and leave the Jews alone.

But they won’t and they didn’t. And so the Etzel decided to make a show of might and force. And a show—albeit with a landmark building destroyed—it would have been, had the call to the hotel not been ignored. In his book, “The Revolt: Story of the Irgun,” Begin quotes a British official who refused to evacuate the building: “We don’t take orders from the Jews.”

But this is the attitude the Jews had long encountered under the British the British. As far back as 1929, Rabbi Yaakov Slonim of Hebron was attacked in the street, by Arabs with knives and stones, as Jews watched on from their windows, helpless.
According to eyewitness testimony:

A Jewish woman who was at the rabbi’s house, dared to go out to the British Chief of Police (who participated in egging on the mob), and begged him to save the rabbi. His answer was: “This is no matter for a dumb, Jewish woman. Go home and stay there. Usually, it is the Jews who are to blame in these cases.”

Though these remarks were said in English, the mob heard and was encouraged by them.

The rabbi’s daughter Rivka Slonim, having survived the pogrom, relates what happened next:

Soon after my father and I shut ourselves up in our home, our neighbor Abu-Shaker appeared on his white horse.

He tied up his horse and sat down on our doorstep. From what he told us – that the British police were aiding the rioters, standing aside when the mob stormed Jewish houses and slaughtered their inhabitants – we knew our final hour had come.

After the massacre, the British made a show of conducting an investigation:

The investigative committee sent out by the British Colonial Office accepted testimony from Arabs only, as well as the infamous police chief Cafferata and Governor Abdullah Kardos.

Jews were not permitted to present their version to the committee, with the exception of Rabbi Yaakov Slonim, the father of the murdered E. D. Slonim.

Rabbi Slonim related the events of the two days in Hebron, of the murder of at least 67 Jews, the destruction of approximately 80 Torah scrolls, and the responsibility of the authorities, particularly Cafferata and Kardos who failed to prevent the pogrom. The committee disallowed Rabbi Slonim’s testimony.

On October 15, 1929, the trials of the murderers began. Sheik Marka, leader of the mob in Hebron, received a two-year prison term which was changed to house arrest, and everything “fizzled away."

Two of the four who murdered Rabbi Meir Shmuel Castel were acquitted due to “lack of evidence.” The two others were sentenced to death. The trials were a show for the gallery. Almost all the murderers went free and kept what they had plundered and stolen. This drove the Jewish community into a deep depression. The clear, positive attitude the British had towards the killers was visible. For most of the trials, a date for proceedings wasn’t even set. . .

This is what happened in Hebron with the British in charge. Under their watch, the “City of Forefathers” became a Jew-free zone in 1929. Only in 1967 were the Jews able to return.

British complicity in the 1929 riots in Hebron and in Safed, too, was illustrative of British feeling toward the Jewish population of Mandate Palestine. The Brits were indulgent with the Arabs, but scorned, sneered at, and persecuted the Jews. What happened in Hebron was one very large piece of evidence—evidence of British hatred for the Jews they ruled.  For in essence, the British assisted the Arabs in emptying out the Jews from an entire Jewish city—the city that until today houses the remains of the Jewish forefathers.

Why should anyone with even a smattering of understanding of what it was like for Jews living under these people in their own land, imagine that they would just shut up and take it—just lie down and die because to the British, like so many other antisemites, the Jews are only so much vermin?

For some Jews—proud Jews like Menachem Begin—that was impossible. No Jew should be treated like that, have to live like that, on Jewish soil. The balance of power was out of whack. So the Etzel bombed a building. But they first told the people to leave: the occupants of the hotel and the people next door at the French Consulate. The Etzel gave advance notice of the bombing to the English-language paper of record and personally evacuated the hotel workers.

No one was supposed to be hurt. But the Brits didn’t think the Jews had it in them. So they failed to leave the building and save themselves. They also failed to share that information with others in the building who were loyal to them, such as my cousin Yehuda, who clearly made the wrong choice.

This is not terror. This is stupid people who hate and underestimate the Jews so much they won’t leave a building about to be bombed, even with advanced warning.

When someone calls to alert you on the phone, telling you exactly what is going to happen when, and leaving you plenty of time to leave--that’s not terror. It’s the world once more refusing to mind its own business and leave the Jews alone. Especially within the borders of Eretz Israel. 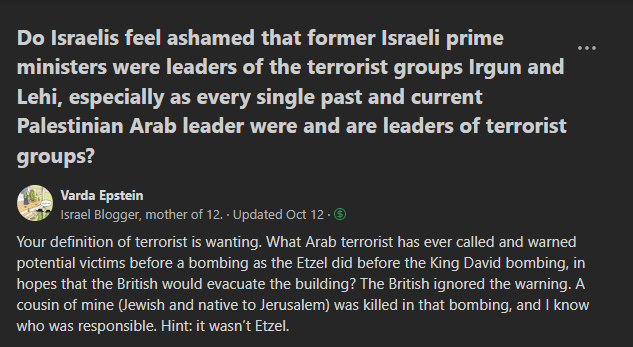 An Arab terrorist isn’t in the business of making a show. Rather than minimizing casualties, he aims to maximize them. And of course, the Arab terrorist’s biggest advantage is the element of surprise.

Arab terrorists come through windows and kill little girls like Hallel Yaffa Ariel. They explode pizzerias and kill little girls like Malki Roth. They burst into homes and decapitate babies like 3-month-old Hadas Fogel. They point their rifles at babies in their strollers taking sun in the park, like 10-month-old Shalhevet Pass. They ram into babies in their strollers at bus stops and kill them, like 3-month-old Chaya Zissel Braun.

And they never warn a soul. Because the entire purpose of terror is to terrorize. Which is what Yehuda Yanovsky would be the first to tell you, were he alive today. My cousin was not a victim of “Jewish terror” but of British scorn for the Jewish people.