Britain Needs To Apologize To The Jews for What They Did During The Mandate, More Than To The Arabs (Tomer Ilan)

Recently, there’s a wave of demands from Palestinian Arabs to the United Kingdom to apologize for alleged abuses during the British Mandate period.

Munib al-Masri, a rich Palestinian businessman submitted a dossier of evidence alleging abuses by the British between 1917 and 1948. Masri is planning to present the file to the UK government later this year and is reportedly demanding a formal acknowledgement and apology.

Separately, a Palestinian Arab is seeking an apology from the Royal Ulster Rifles for a 1938 incident in Mandatory Palestine in which he alleged the British troops forced civilians to drive over a landmine after a roadside bomb placed by Arabs killed two British troops.

The Jews have a right to demand an apology from Britain as well.

The Jews deserve an apology from the British for systematically discriminating against the Jews, in terms of official policy against Jewish immigration and Jewish land purchase and settlement in contradiction to international law, namely the Mandate of Palestine. The British government was also deeply involved in the illegal Arab invasion of Israel in the 1948 war.

The first major anti-Jewish move by the British government came in 1922, when The League of Nations, at Britain’s request, modified the mandate by withdrawing Transjordan from the area intended to provide a national home for the Jews. With a stroke of a pen, the Jews lost 78% of the national home promised to them by Britain and the League of Nations.

Then, as a response to Arab violence, including the 1920 Nebi Musa riots and the 1921 Jaffa riots, Britain published a series of White Papers with new anti-Jewish policies that contradicted the legally-binding League of Nations Mandate for Palestine that Britain was supposed to follow.

The Mandate resolution (Article 6) requires Britain to “facilitate Jewish immigration under suitable conditions and encourage, in co-operation with the Jewish agency referred to in Article 4, close settlement by Jews on the land, including State lands and waste lands not required for public purposes”. The Mandate states that this shall be done “while ensuring that the rights and position of other sections of the population are not prejudiced”.

However, in a series of White Papers published between 1922 and 1939, the British Administration restricted Jewish immigration and settlement rather than “facilitate” and “encourage” it as required in the Mandate resolution.

Initially, the 1922 White Paper vaguely stated that Britain would limit future immigration to "the economic capacity of the country". The 1930 White Paper called for stricter controls to be placed on Jewish immigration and land purchase.

The worst White Paper was published in 1939, on the eve of World War 2, with millions of Jews trying to escape from the Nazi threat in Europe, the paper severely limited Jewish immigration to just 15,000 a year for 5 years and made subsequent immigration to require Arab approval. Jewish purchase of land from Arabs was forbidden in 95% of Palestine.

In effect, the White Paper prevented the escape of millions of Jews from Europe before and during WW2. Six million of those Jews were murdered by the Nazis in the Holocaust. If the British had not imposed the 1939 White Paper immigration restrictions, many of those Jews could have been saved.

The McDonald White Paper of 1939 was explicitly racist and openly discriminated against Jews. Jewish immigration was severely restricted, while Arab immigration was not. Jewish land purchase was forbidden in 95% of the land, while Arab land purchase was allowed in 100% of it. The language of the White Paper was explicit and racist: “Transfer of land save to a Palestinian Arab prohibited” (see map).

In today’s terms, it would be called an “apartheid” White Paper. Anti-Jewish apartheid. 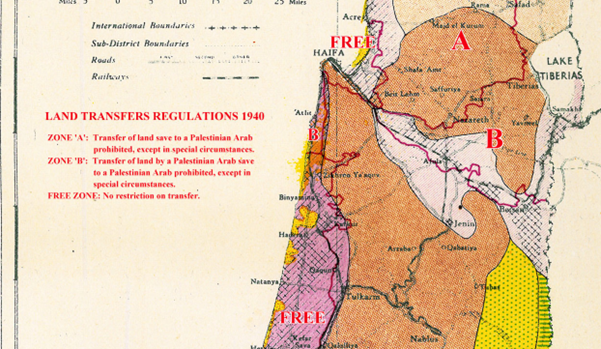 Starting from 1939, the British Authorities also restricted Jewish settlement on Jewish-owned land in direct contradiction to the Mandate resolution requiring them to “encourage close settlement by Jews on the land”. The Jews, however, found a way to establish new settlements anyway, the famous “Tower and Stockade” method.

The British-backed Arab Legion illegally invaded Palestine in 1948 and helped Jordan illegally occupy eastern Jerusalem and Judea and Samaria between 1948 and 1967.

In 1948, Britain had dominant influence over Egypt, Iraq, Syria and Lebanon as well. Those countries would not invade Palestine to fight the Jews, without British involvement.

This is confirmed by Dr. Ezra Nishry’s research. His 2016 doctoral thesis (English Abstract – p. 510) based mainly on the documents of the British National Archives (as well as Israeli and American documents and previous research literature) confirms that the British organized, armed and pushed the Arab countries to invade Israel in the War of Independence.

Nishry shows that the British government used covert action and pushed for the Arab invasion that was actually carried out on May 15, 1948. According to British sources quoted in the research, the senior British leadership in London determined the end date for the evacuation of the British forces from Palestine, brought it forward, and returned to the original date according to the changing needs of the invasion plans which changed according to the circumstances on the ground. There was a direct connection between planning the timing of the Arab invasion and planning the timing of the British evacuation.

His findings were published in a book “The British Trojan horse in the Israeli War of liberation : 1947-1948”.

In many cases during the 1948 war, the British troops themselves helped the Arabs.

One of the worst incidents was at Radar Hill (near Jerusalem) on 23 April 1948. A Jewish force who tried to evacuate wounded Jewish troops in the Many Jewish fighters were killed and wounded in the Nebi Samuel battle, encountered British fire from Radar Hill which killed and wounded a number of Jews. The wounded Jews were collected by the British and handed over to the Arabs who murdered them. 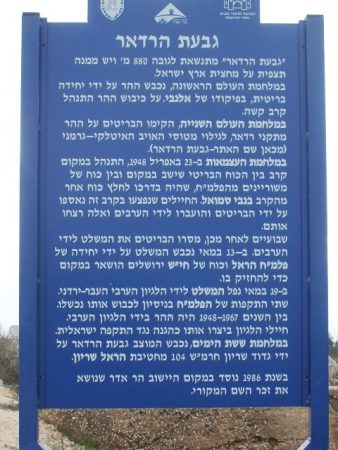 A sign at Radar Hill mentions the battle on 23 April 1948 in which British troops handed wounded Jewish troops to the Arabs who murdered them.

Another example of British involvement against the Jews was in the Etzion Bloc. On 4 May 1948, the Arab Legion aided by the British and by a large number of local Arabs launched a major attack on the Etzion Bloc in which 12 Jewish defenders were killed. A few days later, the Kfar Etzion Massacre was committed and the Bloc was ethnically cleansed from Jews until it was resettled in 1967.

Great Britain should apologize to the Jews for:

These British policies and actions went against their commitment to the League of Nations and against the Mandate for Palestine, i.e. against international law.

The British have more reasons to apologize to the Jews than they do to the Arabs.