There was a single Muslim poem about Jerusalem written before 1967. It is about revenge against Crusaders.

I have always been interested in finding any evidence that Muslims venerated Jerusalem before Zionism.
Jews, of course, have written hundreds of poems in the forms of psalms, piyyutim, zemirot and classic poetry continuously since the time of David.
Up until now, I have never seen a single Muslim poem about the holy city that predates Zionism (or 1967, for that matter.) Every article I had seen on poems about Jerusalem and Palestine have been about recent poetry.
At Raya.com, Dr. Ayman Al-Atoum wrote a series of three articles on "Jerusalem in Arabic poetry" where he says, "Jerusalem was the hearth of poets' hearts, the compass of their love, the beacon of their words, and the melting of their hearts."
In part one, he quotes from poems about Baghdad and Damascus, to show that Arabs have shown great affection for their capitals, so of course - he says - Jerusalem would be one of them. He provides a quick Arab history of Jerusalem. But he doesn't quote any of the poems he refers to.
In part two, al-Atoum asserts that there were lots of Arabic poems about Jerusalem:

If you go and research these huge events that Jerusalem has gone through, you will find their impact in every aspect, whether social, political, economic or cultural. These events inflamed the sentiments of poets, ancient and modern, and perhaps the history books that recorded the poetry of conquests at the beginning of the Islamic rule of Jerusalem, are the ones that re-recorded the poetry of occupation at the beginning of the Crusades, and not more famous than what Al-Abiwardi wrote. 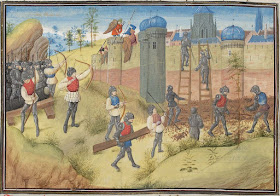 Presumably, al-Atoum is a scholar and he looked for these Arabic poems of Jerusalem - and couldn't find any from before the Crusaders took over the city. So he pretends that there must have been many such poems, and they were copied by Al Abiwardi, who wrote what seems to be the only semi-famous Arabic poem about Jerusalem.

We mingled blood with blazing tears

So there was no mercy left in us.

This war caught its fire with the swarms

Al-Atoum then moves on to his next poem about Jerusalem, written in....1967.

So it appears that the only Arabic poem that may have been peripherally about Jerusalem was written at the time of the Crusades by an Iraqi poet.

Not exactly a tradition of showing veneration for Jerusalem.