Yesterday, the New York Times published a long piece about how Hasidic schools in New York State are failing:

The leaders of New York’s Hasidic community have built scores of private schools to educate children in Jewish law, prayer and tradition — and to wall them off from the secular world. Offering little English and math, and virtually no science or history, they drill students relentlessly, sometimes brutally, during hours of religious lessons conducted in Yiddish.
The result, a New York Times investigation has found, is that generations of children have been systematically denied a basic education, trapping many of them in a cycle of joblessness and dependency.
Segregated by gender, the Hasidic system fails most starkly in its more than 100 schools for boys. Spread across Brooklyn and the lower Hudson Valley, the schools turn out thousands of students each year who are unprepared to navigate the outside world, helping to push poverty rates in Hasidic neighborhoods to some of the highest in New York.

While one can certainly argue that these yeshivas should teach secular subjects better than they are, the article is hopelessly biased: the community deliberately chooses to be separate from the "outside world." It is successful on its own terms and within its own frame of reference. The poverty that the New York Times pretends to care about is utterly unlike the other poor neighborhoods - there are practically no problems of crime or drugs, there are strong families, and an internal support system that borders on the heroic. While the NYT complains about the amount of money that the community receives from the government, it doesn't mention how much the government saves compared to supporting other lower income communities because they have virtually no social problems one sees in other neighborhoods - which means that the schools are part of a success story.
Ironically, the major reason for the poverty that does exist is because Hasidic families choose to spend around tens of thousands of dollars annually for each of their many children to go to their own schools rather than trust public schools to educate them.
The article is problematic on many levels. But it has also predictably sparked a torrent of Jew-hatred. And one of the results is this thread from the New York Civil Liberties Union, which is pure antisemitism:

While NYC public schools are being drained of money, funding is flowing to private religious Hasidic schools.
These schools have received $1 billion+ in public money but are denying students a secular education, trapping generations of kids in poverty.
It’s an issue not unique to New York City — in the hyper-segregated East Ramapo Central School District, a white majority took over the school board in 2009, denying a generation of public school students an adequate education.
For years, district leaders in East Ramapo have extracted resources from public schools, which are almost entirely attended by students of color, in order to lavishly fund yeshivas attended by white students.
State leaders often claim their commitment to an equitable, high-quality education. But if they mean it, they have to do more.
ALL students deserve access to a basic education free from violence and discrimination.

Every sentence is insane.

A public school student costs the government about $28,000 a year, a private school student in one of these schools less than $2,000. Most of that is federal and state money and has nothing to do with school board decisions.  The "$1 billion+" is stretched out over years. (The annual NYC school budget is about $38 billion, I estimate Jewish schools get about 0.7% of that while their students represent about 5% of the total in public schools.) The public schools in East Ramapo are paid for overwhelmingly by the taxes of people who do not send their children to those schools. Every community chooses the members of their school boards, but when a religious Jewish community does the same, they are racist "whites" who are trying to suck the blood of the students of color. 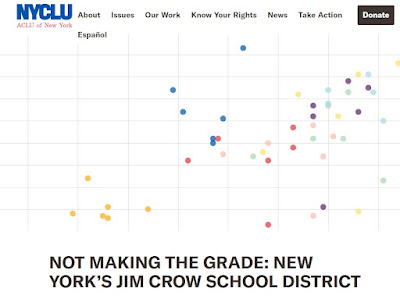 One feature of antisemitism is when Jews are blamed for two opposite, mutually exclusive attributes (like being behind communism and capitalism.)  Here, though, we see the same NYCLU blames religious Jews both for "trapping generations of kids in poverty" and for withholding their fabulous riches from people of color, as their article says:

While East Ramapo public school students are recognized by the state as having high needs compared to other districts, there is substantial income and property wealth within the district....East Ramapo is the most fiscally stressed district in the state, according to the New York State Comptroller. This is not because the district lacks wealth, but because white voters refuse to fund public schools.

The NYCLU claims that religious Jews are wealthy white racists who steal government funds for their exclusive rich schools and are choosing to keep people of color poor and oppressed. But they are also politically powerful but poverty-stricken wretches who steal government funds to keep their own children poor and oppressed, under the tutelage of teachers who beat them (a theme of the NYT article.)
There are real issues to be dealt with, both in Hasidic and public schools. Antisemitism is not the solution for either of them. And to see a "civil liberties" organization inciting against Jews should be a wake up call about antisemitism from the Left.
Elder of Ziyon at Tuesday, September 13, 2022
‹
›
Home
View web version