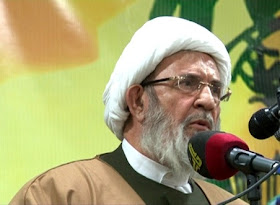 A Hezbollah official on Friday sounded the alarm over the latest U.N. Security Council resolution that extended the mandate of the United Nations Interim Force in Lebanon (UNIFIL).
“What are officials doing regarding the Security Council resolution that granted UNIFIL freedom of movement… without needing a permission from the army for its declared and undeclared patrols?” Sheikh Mohammed Yazbek said.
“This contradicts with the previous agreements and this is a dangerous development that turns the (UNIFIL) forces into occupation forces whose role would be to protect the Israeli enemy through pursuing the people and the resistance,” Yazbek added.
..."The decision is a conspiracy against Lebanon and its sovereignty,” the Hezbollah official went on to say.

But it isn't only Hezbollah. The government of Lebanon seems to agree!

The Foreign Ministry on Wednesday noted that the resolution “contained a text that does not conform with what was mentioned in the framework agreement signed by Lebanon with the U.N.,” adding that “Lebanon has objected against the introduction of this wording.”
“Accordingly, the Minister of Foreign Affairs and Emigrants has requested to meet with the head of the UNIFIL mission to stress the importance of continuing permanent cooperation and coordination with the Lebanese Army in order to secure the success of the mission of U.N. forces in Lebanon,” the Ministry said.
The Nidaa al-Watan newspaper reported Wednesday that Lebanon had requested the removal of “two phrases mentioned in clauses 15 and 16 in the extension resolution, which stipulate UNIFIL’s freedom of movement and the condemnation of any restriction of this freedom in the area south of the Litani River.”

16. Urges all parties to cooperate fully with the Head of Mission and UNIFIL in the implementation of resolution 1701, as well as to ensure that the freedom of movement of UNIFIL in all its operations and UNIFIL’s access to the Blue Line in all its parts is fully respected and unimpeded, in conformity with its mandate and its rules of engagement, including by avoiding any course of action which endangers United Nations personnel, reaffirms that, pursuant to the Agreement on the Status of the United Nations Interim Forces in Lebanon (SOFA) between the Government of Lebanon and the United Nations, UNIFIL does not require prior authorization or permission to undertake its mandated tasks and that UNIFIL is authorized to conduct its operation independently, condemns in the strongest terms all attempts to deny access or restrict the freedom of movement of UNIFIL’s personnel and all attacks on UNIFIL personnel and equipment as well as acts of harassment and intimidation of UNIFIL personnel and disinformation campaigns against UNIFIL; calls on the Government of Lebanon to facilitate UNIFIL’s prompt and full access to sites requested by UNIFIL for the purpose of swift investigation, including all relevant locations north of the Blue Line related to the discovery of tunnels crossing the Blue Line which UNIFIL reported as a violation of resolution 1701 (2006), in line with resolution 1701, while respecting the Lebanese Sovereignty;

This is nothing new - UNIFIL's independence was always part of its mandate. And the Lebanese government's objection to this sounds like they are run by Hezbollah.

UNIFIL issued its own statement today:

UNIFIL has always had the mandate to undertake patrols in its area of operations, with or without the Lebanese Armed Forces. Nevertheless, our operational activities, including patrols, continue to be coordinated with the Lebanese Army, even when they don't accompany us.

Our freedom of movement has been reiterated in Security Council resolutions renewing UNIFIL’s mandate, including Resolution 1701 in 2006, and UNIFIL’s Status of Forces Agreement, signed in 1995.

UNIFIL seems to be getting more and more impatient with Hezbollah lately, and as I have noted, the latest UN Security Council resolution on southern Lebanon condemned Hezbollah although it didn't mention their name. Hezbollah is interfering with UNIFIL's already weak enforcement of UN resolutions to keep southern Lebanon free of non-army weapons.
This seems to be part of Hezbollah's increased threats against Israel in recent months. The group, almost certainly at Iran's request, seems intent on starting a new war with Israel, the rest of Lebanon be damned.
Elder of Ziyon at Monday, September 12, 2022
‹
›
Home
View web version