So far, 100% of the articles I've seen from Palestinians and their supporters have fully embraced the idea that Israel treats Palestinians like Nazis treated Jews.
And 0% have opposed that idea.
Dr. Atef Abu Seif in Palsawa:

The truth is that we are victims of the Holocaust; Because we are the victim of the victim. ...Not only did we fall under the feet of elephants, but we were plotted against us by all the powers of the world, and our people were served an easy meal for the killers to devour. It is the truth that Zionism wants to hide; So that she continues to play the role of the only victim for whom the world must always feel guilty, continue to support her endlessly and imprison anyone who tries to criticize her.

The truth is that the Palestinians are victims of Nazism, which played a major role in the Nakba of Palestine by deporting Jews directly or indirectly to Palestine....If the German chancellor and his apparatus are against racism and against fundamentalism, then according to the law of Jewish nationalism, the Germans must apologize to President Abbas and all the Palestinian people, and not vice versa. German officials are today at the height of hypocrisy, lying and supportive of Jewish racism, and they practice a policy of double standards when it comes to the Palestinian issue.
The use of the term Holocaust is not the intellectual property of the Jews only, ...we can use the same term which the Palestinian people have been exposed to, and are subjected to.

Israel has no right to claim victimhood, and Germany has no right to claim innocence. What Abu Mazen said, was part of the truth they feared... There was a German "Holocaust" against the Jews. There were fifty Israeli "holocausts" against the Palestinians. The crime is the same, the fate is the same, and the artificial hysteria after Abu Mazen's statements means nothing but fear of the truth and fear of the end of every Nazi. 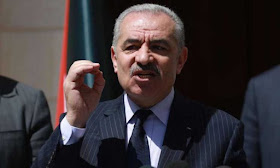 And Palestinian prime minister Mohamed Shtayyeh defended Abbas' words and claims that Palestinians are the victims in this incident:

The world must understand the extent of the suffering that the Palestinian people have lived and experienced, and that President Mahmoud Abbas bears the concerns of our people wherever he descends and settles, and he is not stingy in explaining the suffering of our people.
It is clear that the Israeli propaganda machine did not like the president's clarity and his explanation of what happened to our people, so it launched this ferocious media war against it, which we condemn and denounce, and we salute our people's stand against this attack.