Palestinians shoot Jews trying to visit a holy spot. Not Israelis, not Zionists, not "settlers" - Jews. 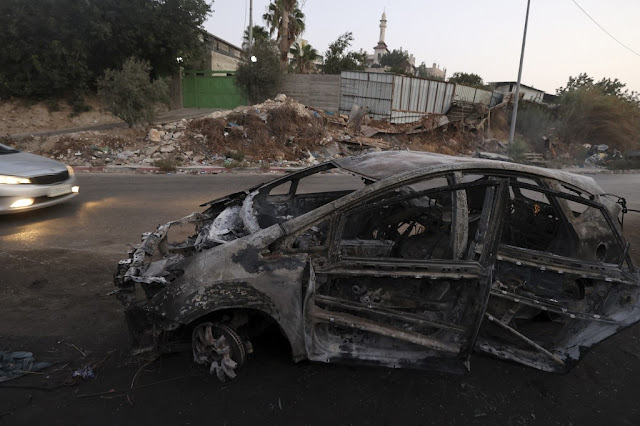 On Tuesday, a group of five religious Jews tried to visit Joseph's Tomb in Shechem (Nablus) without coordinating the visit with the Israeli army.
This is stupid. Everyone knows it is stupid. But sometimes even stupid things need to be explained to truly understand the situation.
Why is it stupid for Jews to try to visit a holy spot in Nablus?
Because everyone knows that Palestinians will try to kill any Jews wanting to pray in areas they control.
Which is exactly what happened.
Two of the Jews were injured, one seriously. One of the injured is a 17-year old child. One of the injured left a trail of blood as he hid in the bushes as the wonderful, tolerant Palestinians torched the car they were in.
Palestinian political and terror groups praised the shooting of Jews. Hamas called shooting a child who wanted to pray "heroic." Islamic Jihad also called shooting Jews  "heroic."  And so did the Palestinian Resistance Committees.
These would-be worshipers weren't armed. They didn't threaten anyone. They didn't hurl insults. They didn't humiliate anyone. Their only crime was being Jewish. If they were American tourists with kipot, the exact same thing would have happened.
They were in danger because most Palestinians are antisemites by every measure, every survey, every poll. They were shot because they were Jews - not because of Israel or Zionism or "occupation" or "humiliation" or "storming" or any other reason.
Even though practically everyone knows this obvious fact, it cannot be said in polite company.
The media knows the truth, but seemingly considers pointing out Palestinian antisemitism to be more offensive than their antisemitism itself.
The "pro-Palestinian" activists know the truth, but they consider it their job to hide that truth.
So even in a story like this, where the reason for the shooting is not at all a mystery, very few people are willing to point out that when Palestinians use deadly force against Jews who want to worship at a Jewish holy spot, it is because most Palestinians hate Jews.
Elder of Ziyon at Wednesday, August 31, 2022
‹
›
Home
View web version