Jabaliya: How The Media Listened To Israel's Side Of The Story And Why (Daled Amos)

In the midst of Operation Breaking Dawn, on Saturday night, at about 9pm, a rocket explosion in Jabaliya in Gaza killed 4 children.

As expected, Israel was blamed.

But this time, unexpectedly, Israel was able not only to present its case that it was not responsible, but also to get the media to present a balanced report that presented Israel's contention that the explosion was the result of a misfired rocket from Palestinian Islamic Jihad (PIJ).

Israel Gets The Media To Notice

The results were media reports that actually were balanced. The Times of Israel had a survey of some of the reporting:

In one incident Saturday, four children were among seven people killed in an explosion in Jabaliya. The Palestinian Health Ministry initially said the blast was caused by an Israeli airstrike. Israel rejected the claim and said it was the result of errant rocket fire, and released a video showing what it said was the Islamic Jihad rocket sharply changing course in the air and hitting the building.

The New York Times referred to the incident twice. First, on Saturday:

Three children were also killed on Saturday, though it was not immediately clear whether they were hit by an Israeli strike or a misfired Palestinian rocket. The Israeli military said they were killed by a failed Islamic Jihad rocket launch.

Israel said some of those children were killed on Saturday night when an Islamic Jihad rocket misfired and fell short in the northern Gaza Strip. The Israeli military said it had not been operating in that area at the time. Islamic Jihad has not commented on the Israeli claim.

France's AFP quoted Israeli sources that  “it had ‘irrefutable’ evidence that a stray rocket fired by Islamic Jihad was responsible for the deaths of several children in Jabalia, northern Gaza, on Saturday.”

At least four children were killed in a blast close to the Jabaliya refugee camp on Saturday, according to Hamas, the group that governs the Gaza Strip. It blamed Israel for the deaths, but the military denied any responsibility, saying the explosion was caused by a failed rocket launched by Islamic Jihad. Al Jazeera could not verify the claims immediately.

On Saturday, The Associated Press reported

The Israeli military said an errant rocket fired by Palestinian militants killed civilians late Saturday, including children, in the town of Jabaliya, in northern Gaza. The military said it investigated the incident and concluded ‘without a doubt’ that it was caused by a misfire on the part of Islamic Jihad. There was no official Palestinian comment on the incident.

However, by Sunday the AP apparently decided that in the interests of balance, instead of presenting the two sides as to who was responsible, it would not address the question of responsibility at all and merely reported “among the dead were six children and four women” -- without any mention the possibility that some of them may have been killed by misfired PIJ rockets.

On the other hand, is the German news site Bild, whose headline was straightforward without hedging, "Palestinian missile kills civilians in Gaza." 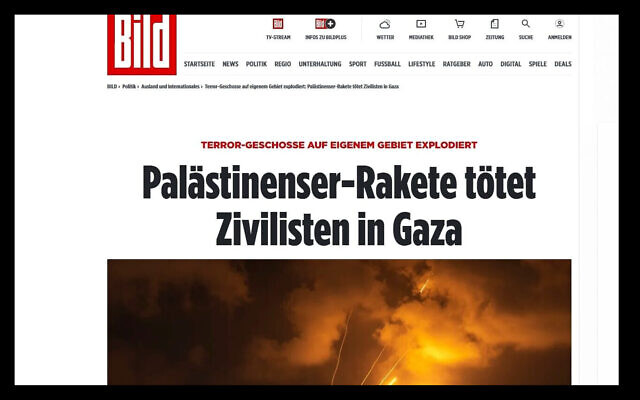 What Did Israel Do Differently This Time?

One of the criticisms of Israel when it comes to getting its side of the story out to the world is that it is just too slow, allowing the terrorists and Israel-haters plenty of time to get their version of things out and presented before the world audience. Israel just does not react quickly enough.

Lahav Harkov addresses this in her article How Israel shot down false reports on Jabaliya explosion. Israel already started responding on the same day -- Saturday.

“We identified the potential for damage from this incident very quickly,” Head of the Public Diplomacy Directorate Lior Haiat said on Sunday. “We understood it could be a public diplomacy catastrophe that could lead to diplomatic harm that could change the direction of the campaign.”

Within minutes, Haiat, IDF Spokesperson Ran Kohav, representatives of the Shin Bet (Israel Security Agency), the Prime Minister’s Office and the Foreign Ministry discussed the incident. Defense officials were quickly able to determine not only that the IDF was not responsible, but that Islamic Jihad very clearly was.

Haiat was able to coordinate a media plan with the others within an hour. [emphasis added]

Here is Israel's statement that came out the very same day, via Twitter: 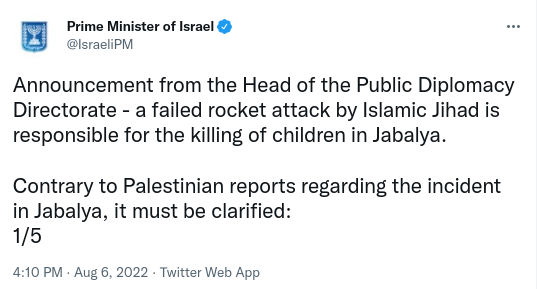 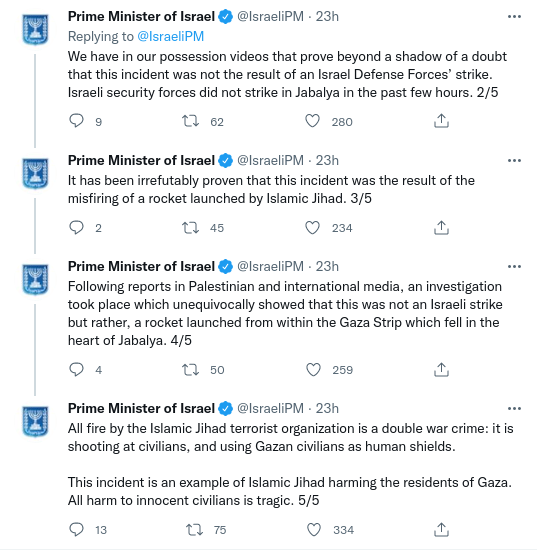 And that was only the beginning.

The statement was translated into multiple languages and delivered to Israeli embassies worldwide, which then passed the statement on to local media.

The IDF posted a statement as well: 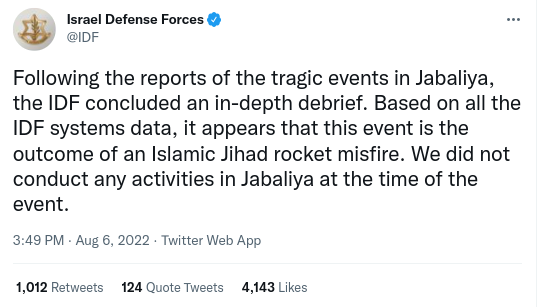 Keren Hajioff, PM Lapid's International Spokeswoman made a video for TV and social media, where she made a similar statement:

Tonight, Islamic Jihad terrorists in Gaza fired a rocket towards Israeli children, but ended up killing Gazan children instead.

This is the truth about what happened ⬇️ pic.twitter.com/sLVLWlU0tS

Another welcome step, considering Israel's reputation of not dealing well with the media, was Culture and Sports Minister Chilli Tropper being released from an ongoing Security Cabinet meeting so that he could speak to Israeli media on behalf of the government.

Of course, it helped that Israel was able to provide videos to support its claim:

Palestinians accusing Israel of killing 5 kids yet at 20:40 a rocket barrage was reported into Israel. At the same time, the news broke of massacre in Jabaliya in which 5 children were killed. The IDF confirmed NO ATTACKS were carried out in the area at that time by Israel. pic.twitter.com/kIX72TnxR5

Maybe it can even do a better job in presenting its side in the death of Abu Akleh.