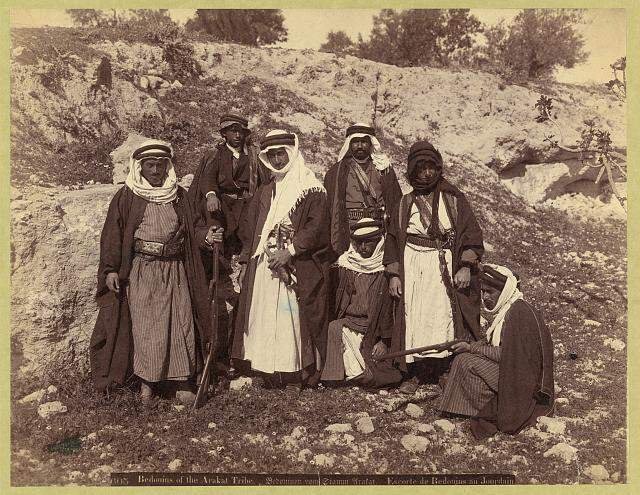 Some claim that the Palestinian people have existed for centuries. Here is an account of what Southern Syria (what Arabs called Palestine) was really like in the 19th century, from an 1883 article in the Fortnightly Review by  Captain C. R. Conder, about how absurd the idea of a unified Palestinian Arab population was:

Why do not these oppressed subjects of a foreign power [Turkey] help themselves to liberty? There are, it is true, perhaps only a dozen real Turks in the country, for the Pashas even are Kurds, Armenians, or Europeans. Yet to expect a national rebellion is to argue a great want of acquaintance with Oriental character. The power of combination for a common object is unknown in Eastern communities. Arabi's army might — so some of his officers said — have deserted en masse if any one of them had been able to trust another with his real wishes. To the peasant, the village faction appears more important than any national league, and the Turk knows well how to rule by dividing. Southern Palestine, within the memory of living men, was divided into two fierce factions — the Keis, who seem to have been mainly the original peasantry on the west, and the Yemini, allied with the Eastern Arabs, who were pushing northwards from Yemen. The battles fought between these factions are yet related by the village elders, and much courage and daring was then exhibited by the peasantry.
In Jerusalem itself, three of these factions still divide the Moslem population. The Hoseini, in the middle of the town, are the most powerful ; the Khaldi occupy the east quarter ; the despised Jauni abide among the Jews on the south. A Hoseini mother would rather see her daughter die unwedded than suffer her to take a Jauni husband. The same survival of faction I have traced in many other towns of Palestine, and the division of these Moslem parties, even in the petty villages, is almost as great as that which separates the Moslem from the Arab Christian, Latin, Greek, or Maronite. It is by fostering such ancient enmities, and by playing the Druze against the Maronite, the Arab against his elder brother, the Greek against the Latin, that the Turk retains his power over the numerous sects which are found in Syria. It was the same spirit of disunion which in older days gave birth to fifty Gnostic sects in the Holy Land, and which created the twelve Christian creeds which are now to be found side by side in Jerusalem.
The same spirit of disunion exists also among the Bedawin, and, indeed, manifested itself among the early conquerors of Islam as soon as their prophet was dead. Recent events in Egypt and Sinai have not shown us the "noble Arab," in whom we have been told we are to place our trust, in a very favourable light ; and the student of history, whether in Omar's time or in the days of Napoleon, will find that the Bedawin have never fulfilled the expectations of their admirers, and have rarely evinced any great nobility of character. As allies no nation could be more unsatisfactory. They skulked over the Kassassin battle-field to rob and mutilate the dead ; they took money to murder Englishmen who trusted to their reputation for good faith ; and they stole a few cows from the British camp. They never took a side heartily for or against Arabi, and they deserted him at his need. Truly, the noble Arab is not found either in Moab, in Sinai, or in Egypt; and we may well question if he exists in Arabia, for those who know the Syrian Arabs well say that the Nejed and Yemen tribes differ only in being fiercer and more warlike ; while as regards the Sakhur and the Anezeh and other large clans who are more remote from European influence than the Belka Bedawin, it has been my experience that they only differ in being greater savages, more ignorant, crafty, and unreliable than those who know better the power of the West. Truly, one is tempted to regard the noble Arab as " an extinct race which never existed."

This is the history that has been excised from not only Arab but Western textbooks as well.
(I had excerpted much more from this article in 2008.)
Elder of Ziyon at Monday, August 15, 2022
‹
›
Home
View web version