There's been a "Marshall Plan" for Palestinians for decades. It didn't work.

World Jewish Congress president Ronald Lauder made a splash earlier this month when, in Arab News, he suggested a new "Marshall Plan" for Palestinians to help bring peace.

It might seem counterintuitive, given the decades of failed peace efforts, but I believe this is exactly the right time to offer the Palestinians a new initiative — one that they cannot turn down. What I am suggesting is a “Marshall Plan” that would offer the next generation of Palestinians a future of wealth, success and self-reliance, rather than the dismal prospects of the past.
Just as the Marshall Plan put Europe on a sound financial footing, the Palestinian plan should focus on the creation of small businesses, home building, hotels, restaurants and job creation that would offer a positive future to the next generation.
A fixed sum of money could be given to young entrepreneurs to create new businesses, which would be closely monitored. If they prove to be viable but need a financial boost after a year, another small infusion could be given. In other words, provide Palestinians with all the things that made Israel and other countries financially viable, which would help create a new and successful Palestine.
Within three-to-five years, I believe per capita wealth would double annually. The wealthier a future Palestinian nation becomes, the more likely it is that it could be the viable, successful country it should be — and every country in the region would benefit from this change.

This is short-sighted, for a number of reasons.
First of all, for decades, the per-capita aid to the Palestinians has dwarfed that of every other nation. In other words, they have already been the recipients of the most extensive "Marshall Plan" in history - and it has not moderated them one bit. 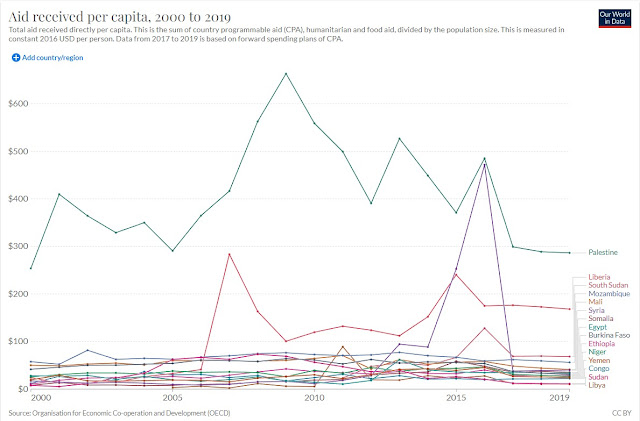 Notice that even in 2019, when the US has sharply reduced aid to the Palestinians under Trump, they still received nearly double the aid per capita of the next highest recipient and quadruple that of #3.
In 2009, they received some six times what the next highest recipient was. But that didn't stop three more wars from Gaza.
Throwing money at the problem doesn't solve anything when it comes to Palestinians.
Secondly, while the PA budget is in very bad shape, a lot of that is because the government itself insists on giving a significant percentage of its budget to reward terrorism. As long as that is happening, the PA cannot and must not be a recipient of aid, directly or indirectly.  The message from the world must be that this is unacceptable - not that we will send yet more money.
Thirdly, the Palestinians themselves ridicule the idea. They want Jerusalem and Hebron to be Judenrein, they demand "return" to destroy Israel demographically, they think that the ICC and UN and "human rights" NGOs will destroy Israel given enough time so they can sit back and wait.
What about aid to individual entrepreneurs, as Lauder suggests? That is also already happening. The US, Canada and private initiatives are already investing tens of millions to help Palestinian businesses. And it is not a bad idea. Palestinians high tech teams are already partnering with their Israeli counterparts. Israel is expected to increase 4G wireless networking in the territories during Biden's visit, which should help Palestinian high tech firms find partners worldwide. The Palestinian Authority does not seem to recognize that services that could be done remotely like coding should be a national priority.
Creative Palestinians will find ways to build up their businesses anyway. But they aren't the problem that needs solving.
The main problem is that the majority of Palestinians think that terrorism is the best Palestinian strategy, as the most recent poll shows.
Throwing money at people who believe in terrorism is not how to bring peace. The PA, Hamas and those who support the goals of destroying Israel should be getting less money, not more. The linkage should be explicit.
Which is what Israel is already doing. It links work permits to calm. When there is relative peace, more Palestinians can enjoy the benefits of being neighbors with an economic powerhouse. As soon as a rocket is shot towards Israel or a Jenin terrorist stabs someone in Tel Aviv, the borders get sealed - an obvious and logical response to a country under attack. Palestinians can see the linkage between their actions and consequences, and they don't want to suffer the consequences. Even Hamas has been acting to keep things calm.
This is not peace. With the current Palestinian mindset, it will never bring peace. But it brings calm, and that is the best we can hope for.
Throwing money at the problem gives a disincentive for Palestinians to cooperate with Israel. It gives the false impression that they don't need to think about working together with Israel because the cash is coming in anyway.
Linking their actions with immediate consequences - both positive and negative - is the best and most effective way to save lives, and, ultimately, to allow both sides to prosper.