As the Mufti forbade selling land to Jews, Transjordanian sheikhs WANTED Jews to buy their land

In the early 1930s, the antisemitic Mufti of Jerusalem convened a series of meetings where Arab sheikhs pledged not to sell their land to Jews - a policy that continues today with the Palestinian Authority.
November 21,1934 Palestine Post: 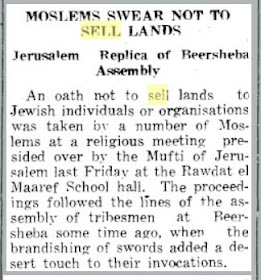 But as this was happening, landowners in Transjordan compared their poverty with the prosperity in neighboring Palestine, and concluded that Jewish investments was what Transjordan needed.
JTA reported on January 18, 1933:

The Hebrew paper “Davar” discloses today that Transjordanian tribe heads have for some time been approaching the Jewish Agency with offers for the sale of land. The miserable situation of Transjordania as compared with the prosperity in Palestine convinces them that the salvation of Transjordania can come only through the Jews, the tribe leaders are reported to have said. These same leaders have urged Emir Abdullah to encourage the Jews to settle in Transjordan, the paper writes.

Permission to sell Transjordan land to foreigners is requested in a petition signed by twenty-one of the most influential Transjordan tribal leaders and members of the Legislative Assembly, which has been submitted to the Palestine Government and Emir Abdullah.
The petition emphasizes that the precarious condition of the country calls for such action.
The petition, which was drawn up following a meeting of Arab chieftains, in Amman, adds a new chapter to the Transjordan matter which was apparently closed on January 25th when Emir Abdullah announced the cancellation of an option he had granted to a Jewish company for the lease of 70,000 dunams of his personal domain in Transjordan.
The Arab chieftains at their meeting in Amman discussed Emir Abdullah’s communique announcing the cancellation of the lease to Jews. The majority of those present, however, found that the sale of land to Jews is the only solution for the present acute situation.
Seventy percent of the cattle owned by the Arabs in Transjordan have perished from starvation, it was stated.

Transjordan and Palestine had similar climates, similar resources, and the Arabs were from similar tribes. The only reason Palestine was thriving and Transjordan was failing was because of Jewish energy and investments. This was obvious to everyone at the time, including Arabs.