Three minutes of color film footage of the Jews of Nasielsk, Poland, on the eve of the Holocaust (video) 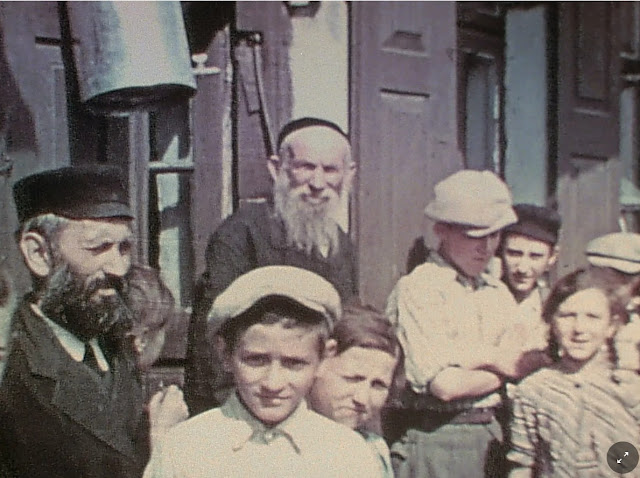 In January, The New York Times wrote a story about a new documentary about the discovery and preservation of a remarkable color home movie.

Glenn Kurtz found the film reel in a corner of his parents’ closet in Palm Beach Gardens, Fla., in 2009. It was in a dented aluminum canister.
Florida’s heat and humidity had nearly solidified the celluloid into a mass “like a hockey puck,” Kurtz said. But someone had transferred part of it onto VHS tape in the 1980s, so Kurtz could see what it contained: a home movie titled “Our Trip to Holland, Belgium, Poland, Switzerland, France and England, 1938.”
The 16-millimeter film, made by his grandfather, David Kurtz, on the eve of World War II, showed the Alps, quaint Dutch villages and three minutes of footage of a vibrant Jewish community in a Polish town.
Old men in yarmulkes, skinny boys in caps, girls with long braids. Smiling and joking. People pour through the large doors of a synagogue. There’s some shoving in a cafe and then, that’s it. The footage ends abruptly.
Kurtz, nevertheless, understood the value of the material as evidence of Jewish life in Poland just before the Holocaust. It would take him nearly a year to figure it out, but he discovered that the footage depicted Nasielsk, his grandfather’s birthplace, a town about 30 miles northwest of Warsaw that some 3,000 Jews called home before the war.
Fewer than 100 would survive it.
Now, the Dutch filmmaker Bianca Stigter has used the fragmentary, ephemeral footage to create “Three Minutes: A Lengthening,” a 70-minute feature film that helps to further define what and who were lost.

It isn't so easy to find the actual footage as a whole, but I found a lower-resolution version with some added background music.
The kids are excited, making faces, jumping into the view, even hitting each other. Men and women help their elderly parents down the stairs of the synagogue. It is all utterly unremarkable except that nearly all of them would be gone within a few years.
This is a rare view of how dynamic and alive the Jews of pre-war Europe were, and how many distinct worlds were lost in the Holocaust.