The other Turkish occupation 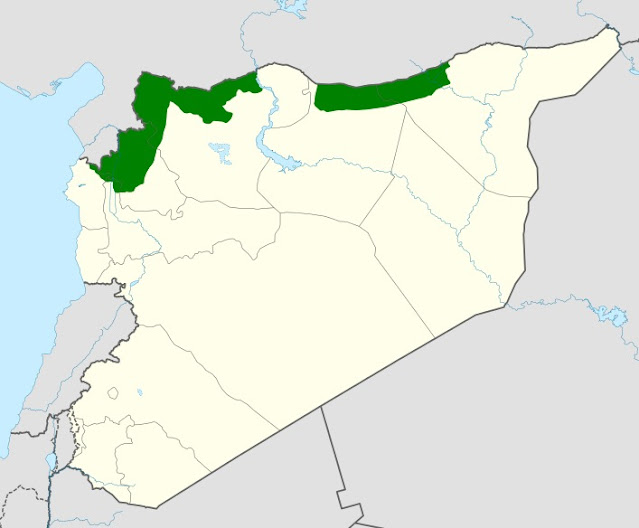 Everyone knows about Turkeys' occupation of Northern Cyprus.
But Turkey also occupied large swaths of territory in northern Syria, and the people who scream about the evil of Israeli "occupation" are silent.

Not only that, but Turkey is threatening to invade Syria, and - again - the people who are upset about countries like Russia invading their neighbors seem to not have much of a problem with this.
From AP:

Turkey's president told journalists that Ankara remains committed to rooting out a Syrian Kurdish militia from northern Syria.
"Like I always say, we'll come down on them suddenly one night. And we must," Turkish President Recep Tayyip Erdogan said on his plane following his Saturday visit to Azerbaijan, according to daily Hurriyet newspaper and other media.
Without giving a specific timeline, Erdogan said that Turkey would launch a cross-border operation against the Syrian Kurdish People's Protection Units, or YPG, which it considers a terrorist group linked to an outlawed Kurdish group that has led an insurgency against Turkey since 1984. That conflict with the Kurdistan Workers' Party, PKK, has killed tens of thousands of people.
However, the YPG forms the backbone of U.S.-led forces in the fight against the Islamic State group. American support for the group has infuriated Ankara and remains a major issue in their relations.
Ankara has launched four cross-border operations into Syria since 2016 and controls some territories in the north with the goal of pushing away the YPG and establishing a 30-kilometer (19-mile) deep safe zone where Erdogan hopes to "voluntarily" return Syrian refugees.
In 2019, an incursion into northeast Syria against the YPG drew widespread international condemnation, prompting Finland, Sweden and others to restrict arms sales to Turkey. Now Turkey is blocking the two Nordic countries' historic bid to join NATO because of the weapons ban and their alleged support for the Kurdish groups.

Oh, and Turkey is building settlements, too, to move Syrian refugees to areas under its control
The media seems strangely uninterested.
Elder of Ziyon at Wednesday, June 01, 2022
‹
›
Home
View web version