The New York Times has joined CNN, AP, the Washington Post et. al. in doing a nearly identical analysis of how Shireen Abu Akleh was killed.
It makes most (not all) of the same mistakes the others did, and fudged things to make it look like no one but the IDF could have killed her. But physics is physics, and there is no way that the IDF was in the proper range given by - in their case - two audio analyses by different experts.
The Times did a great illustration of their analysis. I added the real position of the IDF and the position of the two houses that I think are the most likely location of snipers, showing how those two buildings are within the range: 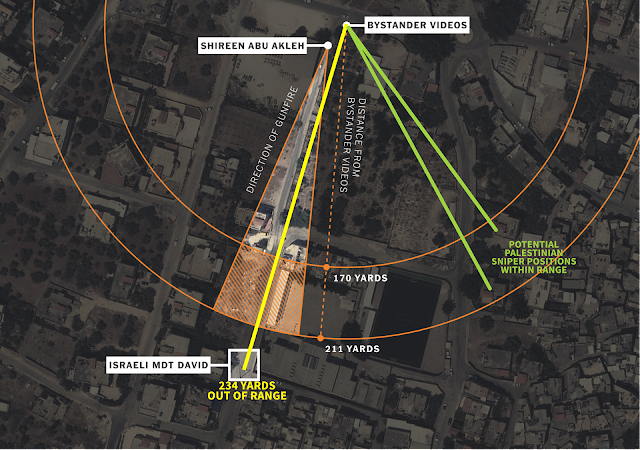 I have shown that witnesses pointed out snipers in buildings south and southeast of the journalists. And that the two main journalist witnesses, Ali Samoudi and Shatha Hanaysha, had both said that the gunfire came from buildings across from them.
I described my logic of the position of the real shooters here, and you can also see there this video from two days later showing how little Jenin gunmen on rooftops care about accuracy when they shoot.
Put it all together, and not only is it impossible (with the information we have) that the IDF could have shot Shireen, but it is highly likely that she was shot by one of the gunmen that we don't have video of but that we have multiple witnesses for.
And that other potentially relevant fact that could explain why we don't have video. The Jenin Camp Telegram channel has been the clearinghouse for videos around Jenin that morning. It takes videos from multiple sources, and that is where the news media are getting many of the videos they are analyzing. Telegram channel had asked residents, on that very morning, not to photograph any shooters in houses!

"Please brothers, the family inside the houses, no one photograph the gunmen - pray for them."
The New York Times, along with the other analysts, always seem to assume that because they have multiple videos, they have a reasonably complete picture of all of Jenin that day. It is a natural bias to trust things you can see rather than theorize about what you cannot. But when determining who shot this bullet, not only is the IDF outside the range of the audio analysis, but they wouldn't shoot as wildly as the shooters did - if they wanted to aim at the reporters as the "experts" want to say, they would not have been hitting trees.
The gunmen on the video seen above, however, would shoot exactly as we saw.
Elder of Ziyon at Monday, June 20, 2022
‹
›
Home
View web version