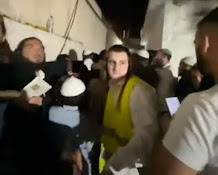 Palestinian gunmen opened fire during clashes with IDF troops guarding worshipers at a Jewish shrine in West Bank early Thursday, lightly wounding three Israelis.
The clashes erupted as hundreds of Jewish worshipers under military escort arrived to pray at Joseph’s Tomb on the outskirts of Nablus. According to the Israel Defense Forces, armed Palestinians directed “massive gunfire” at the compound.

Here is video from the attackers' side:
And here's what it looked like inside the compound:
The comments on the video praises the people shooting at religious Jews, and takes pride in the "cowardice" of Jewish worshipers taking cover from bullets and firebombs.
Islamic Jihad is taking credit for the attack, couching it in religious terms as they praise their "blessed fire."
And yet the one phrase one hardly hears when the media talks about Palestinians is "antisemitism." No matter how blatant the attacks are against Jews, no matter how much Palestinians cheer attacking recognizable Jews, no matter how explicit their Jew-hating rhetoric is on their own media - Western reporters stay far away from mentioning what is obvious to all.
These attacks aren't against "Zionists." They aren't targeting "Israelis." They are targeting Jews. Everyone knows this. Yet no one wants to say it out loud.
The "pro-Palestinian" crowd that claims to be against antisemitism will be silent about this. So called "experts" on antisemitism like Marc Lamont Hill and Linda Sarsour and Peter Beinart will not say a word of condemnation. "Human rights" organizations will likewise stay silent because Palestinian Jew-hatred contradicts their carefully constructed narrative of Jewish culpability for all problems in the region.
Meanwhile, Palestinians themselves openly celebrate the blatant attack on a Jewish holy site and the people who want to pray there.
Jews should be allowed to freely worship in their holy spaces. Under the Oslo accords, Jews visiting Joseph's Tomb should be protected by Palestinians, not attacked by them.
The insistence that Palestinians only hate "Zionists" or "settlers" is, to put it simply, a lie. It is a lie that the Arab world made up a century ago and one that the West has embraced, because hate is so distasteful. Accusing people of hate for no reason is seen as Islamophobic or Arabophobic; much better to pretend that it is a political issue and that the bigots are really just fighting for their rights. This, in turn, encourages the modern antisemites to increase their efforts to ethnically cleanse the region of Jews, knowing that the West is fully embracing their narrative.
The Western world's refusal to face the truth doesn't make things more peaceful. On the contrary, it prolongs the conflict.
Call this incident what it is: a Palestinian attack on Jews because they are Jews.
Elder of Ziyon at Thursday, June 30, 2022
‹
›
Home
View web version